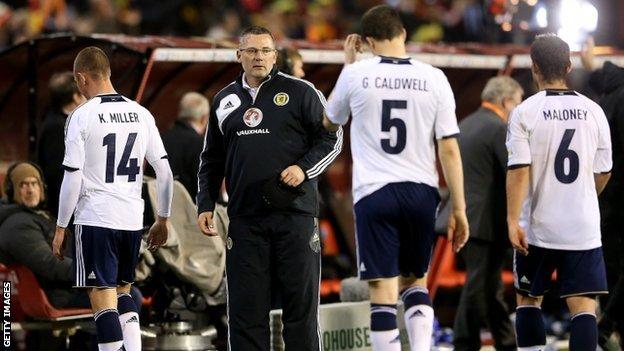 Facing a brief and sombre media conference after Scotland's loss to Belgium, Craig Levein said that he "100% wants to remain in his job" and had given no thought to resignation.

But, with Scotland bottom of World Cup qualifying Group A, having collected a miserable two points from four matches, the question is: does anyone else want the manager to stay on?

The answer is yes, if you ask the team captain.

Darren Fletcher's defence of Levein on the eve of the 2-0 reverse in Brussels was as a robust as it was sincere, the Manchester United midfielder going way beyond the standard platitudes trotted out when a coach is under pressure.

And, immediately after the game, the skipper said: "The players work for and believe in Craig Levein.

"Qualification looks difficult, but we can still progress as a team."

Goalkeeper Allan McGregor, who performed so heroically during a first-half onslaught at the King Baudouin Stadium, also launched a staunch defence of Levein.

And these players matter, given their eminence in a squad bereft of top-quality talent.

But the answer is no if you ask fans fed up with poor results.

Many Tartan Army members rank Levein's infamous and wholly unsuccessful no-strikers approach in Prague in 2010 as the nadir of their time backing the national side.

Levein's record was widely scrutinised in the build-up to the loss in Belgium and the stark facts are worth repeating.

From 13 competitive games in charge, the former Hearts and Dundee United boss has eked out only three wins - a double over lowly Liechtenstein and a home success against Latvia, all by single-goal margins.

His stubborn streak and contrary nature have also been analysed.

But the same belligerence that saw him overlook striker Steven Fletcher until the panic bells started ringing makes it unlikely he will fall on his sword.

There were no green shoots of recovery in Brussels to strengthen Levein's case for staying on, yet he continued to talk of "progress".

"The players are hungry and determined," he said. "They did everything possible to get a result for Scotland. They did not have an ounce of energy left."

But qualification hopes for Brazil 2014 had been dashed by lethargic and timid displays at home to Serbia and Macedonia, who both felt aggrieved to leave Hampden with only one point.

Levein again criticised the match officials for Friday's crippling loss to Wales and, although he has a strong case, such peevishness was something of a default setting for the 47-year-old during his club management days.

Better sides than Scotland will lose to this effervescent Belgian team. They put four past the Dutch and scored three in Serbia.

However, deficiencies in all departments, particularly a shaky defence, would have been more cruelly exposed if it were not for the form of McGregor in the opening stages.

Levein stressed that Belgium have been rewarded for keeping faith with their squad of callow talents and giving them time to mature.

He repeated his assertion that the in-form Red Devils were the "perfect example of sticking with a system".

But he would do well to remember that Marc Wilmots is the third man in the manager's position since 21-year-old star Eden Hazard made his international debut.

Levein will be writhing under the lashes of criticism coming his way, but it is how his superiors at the Scottish Football Association react to the heat generated by this dismal campaign that will decide his fate.

He has a cosy relationship with SFA chief executive Stewart Regan, but even his closest ally has given himself some wriggle room.

Speaking after the disappointing draws with Serbia and Macedonia, Regan said: "Craig has backed himself to succeed and we back him as well" - before adding ominously: "He knows he is accountable for performances and results."

Regan is paid handsomely to make difficult decisions. He and his board either stand by their man for a third campaign or act swiftly to find a replacement.

Many of the bedraggled Tartan Army members trudging homewards today might not think that is such a testing choice.