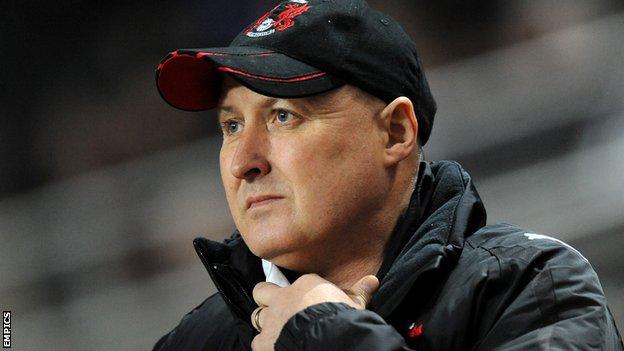 The O's are now five points off the play-off places in League One following Tuesday's 1-0 win over Hartlepool.

"We all want a bit more but we're going in the right direction. We're a difficult side to beat," he told BBC London 94.9.

"We didn't lack the creativity but if we are a little bit more ruthless in front of goal then who knows where we will go?"

He added: "We've got ourselves up to 12th in the table and we've got to push on again. We're doing OK."

Slade was pleased his side managed to bounce back against Pools after the O's suffered a 2-0 defeat at AFC Bournemouth at the weekend.

"If ever I wanted a response, I thought I got one," he continued.

"The only thing we missed was three or four more goals which we deserved. It really should have been a lot more comfortable for us.

"As an all-round team performance, that's as good as we've played."

The 19-year-old has broken into the first-team set-up at Brisbane Road this season and has scored one goal in 12 appearances.

"He had a terrific game and was really positive from the start. He took his man on early on in the game and got a bit of joy," added Slade.

"We've just got to be careful with him.

"He's improving on the training ground all the time and it's all about his development in the first team now.

"He will hopefully go on from strength to strength."