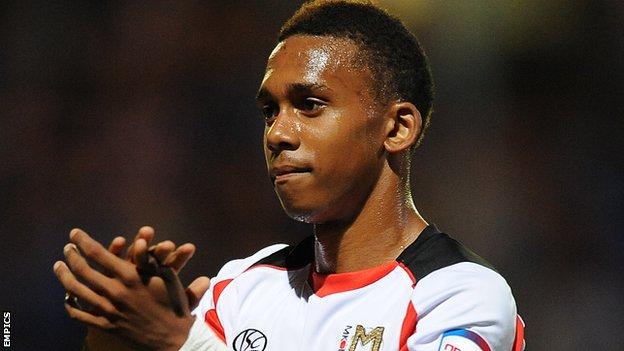 The Glovers drew 2-2 with Torquay and went on to win 5-4 on penalties, with 20-year-old Marsh-Brown scoring the winning spot-kick.

"We thought he was our man of the match and he tucked it [the penalty] away nicely," Johnson told BBC Somerset.

Marsh-Brown joined Yeovil following his release from Oldham in the summer.

He was initially used as a substitute but earned himself a starting spot after scoring twice in four games.

However, he found himself back on the bench and Johnson began to question the winger's attitude.

"He was never out of the Yeovil mentality, he just needed to understand and learn it," said the Glovers boss.

"He's still learning the game and while they're learning they're going to be a bit up and down.

Johnson revealed after the game he left it late to choose his penalty takers.

"We practiced our penalties [in training] but they were absolutely useless," he said.

"So me and Terry [Skiverton] decided to pick the penalty takers on the strength of their game.

"We asked them to step up, be confident and strike it hard. We got all five and it was a better percentage than we got in training."