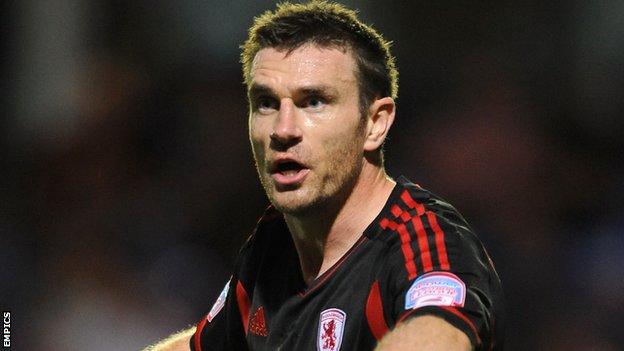 McManus is contracted at Boro until the end of the season but has only played three games so far this term.

"The last time I came, it was a breath of fresh air and I really enjoyed my time here," the 30-year-old told BBC Radio Bristol.

"There seems to be a different feel around the team this year - it's more positive.

His loan spell was curtailed early last time and I think he feels he has unfinished business here.

"The manager has brought in some very good players so I'm looking forward to getting started."

McManus was recalled early from his last loan spell at City following a string of injuries in Tony Mowbray's Boro squad.

"I think he feels he has unfinished business here," said manager Derek McInnes.

"He was desperate to come back and now we have him for the next three months.

"Stephen is experienced at Championship level, has battling qualities, defends his box and can be the first-ball winner. He'll be very dominant and a good professional to have about the place.

"This position is one we've been looking to strengthen for some time and it's great we've got someone who can come in, is desperate to play and also knows all about us too."

McManus is, however, unable to face his parent club at the Riverside on 24 November, or play in the FA Cup third round.