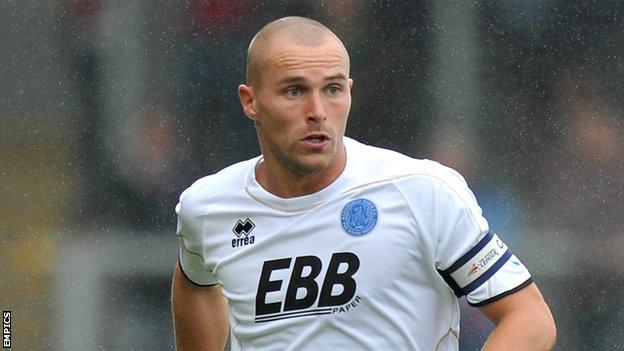 Aldershot Town captain Ben Herd has called on the club's supporters to get behind the team and help them escape the League Two relegation zone.

The Shots have lost their last six games in all competitions.

"When you're a fan you need to get behind the team when they need you the most," Herd told BBC Surrey.

"It's easy turning up when you're winning every week. Sometimes you need to be patient and support the team through the bad times as well."

The 27-year-old defender continued: "Players are just custodians of the shirt.

"The fans will be here long after all the players have left and it's important we represent them on the pitch.

"They are magnificent at home and do make a real difference.

"When the crowd are getting behind the team they can almost suck a goal in for us. Hopefully we can give them something to shout about."

Herd, who turned down an offer from a League One club this summer to sign a new deal with the Shots, is convinced they will soon end their current losing streak.

"We've got to get all the troops together and not get too downbeat.

Any fan just wants to see passion, commitment and players working for the shirt. That's what we have to try and give them

"There's no secret. It's just hard work and dedication," he said.

"Eventually the worm will turn, we'll get a bit more rub of the green and things will start to change.

"We had it last year when we were on a bit of a downbeat run. We went to AFC Wimbledon and got a result out of nothing and it set us up for the rest of the season."

Aldershot welcome Rotherham United to the EBB Stadium on Saturday and Herd added: "Every game is an opportunity.

"We shouldn't be scared because teams are above us in the league - there are not many below us.

"We need to get a result from somewhere and you can't look past your next game."