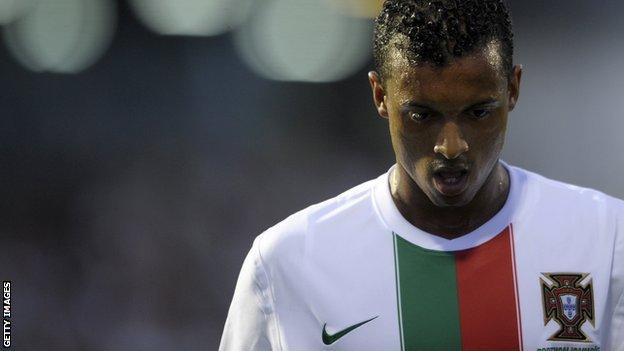 Autumn in Porto tends to suit Nani. The Manchester United wide man struck two goals on Paulo Bento's debut as Portugal coach two years ago this month at the Estadio do Dragao, and he repeated the feat at the same venue last October, in a 5-3 win over Iceland.

Yet United fans will probably lament that today's Nani is not the one of last year or the year before. So it proved again in Tuesday's draw with Northern Ireland in the northern Portugal city.

On a wet night at the Dragao the 25-year-old again frustrated, starting brightly but ultimately producing little of consequence. It mirrored the pattern of his display in last Friday's defeat by Russia.

If Zenit St Petersburg coach Luciano Spalletti was watching the match involving his adopted nation on Friday, he might have wondered what he ever saw in Nani. The attempts of the big-spending Russian champions to push through a transfer deadline deal with United for the winger eventually foundered on wages.

Nani laboured on the right-hand side in Moscow, seeing much more of the ball than Cristiano Ronaldo on the opposite wing but failing to supply any quality service. Whereas Portugal have often been profligate under Bento, they looked bereft of ideas against Fabio Capello's team.

How times have changed. When Nani arrived in England in 2007 he bristled with explosive energy and creativity, but often looked spent after an hour. Today his physical stamina is exemplary, but the spontaneity and imagination that made him such an enthralling watch is missing.

Nani split opinion in February 2008 when Arsenal's William Gallas kicked him for showboating in United's 4-0 hammering of the Gunners in the FA Cup. Whatever your view, it displayed an impishness that has not been seen for a while.

Over the years he has grown, and he carries more responsibility on his shoulders at United, particularly since the 2009 departure of Ronaldo to Real Madrid. Originally, Nani appeared to flourish out of the shadow of his illustrious team-mate.

He is no longer a greenhorn in the context of the national team either. Tuesday's appearance was his 64th for Portugal and, while there is no doubt that Ronaldo is the main man, Nani is highly valued within the set-up.

In the build-up to Euro 2012 he looked like being Portugal's only goal threat. His smartly taken effort in the pre-Euro friendly against Turkey was their only goal in the first four fixtures of the year.

Nani's importance was emphasised as Bento tried a number of permutations to figure out how to use him most wisely.

The coach experimented with him in a free role in the centre, positioned just off a lone striker, in a May friendly with Macedonia.

Maybe the lack of clarity of his role disturbed him. Nani had a quiet Euro 2012, shining on occasion but not grabbing games by the scruff of the neck as he did in the early days of Bento's reign.

Tantalisingly, there were glimpses of his best against Northern Ireland. One tremendous dribble just past the hour mark took him past a posse of defenders but his low cross failed to find the finishing touch in the centre.

Nani almost grasped redemption with a fizzing shot from distance that flew just over in the closing moments. Yet the enduring image of his night will be his latest over-hit cross midway through the first half, drawing the first whistles of the evening from a soaking and impatient crowd.

Tuesday's edition of Italian newspaper Gazzetta dello Sport suggested that AC Milan will attempt to sign Nani at the end of the current season. Their Serie A rivals Juventus and Inter Milan have also been credited with an interest in the past, as well as Zenit.

Premier League fans of dazzling wing play will hope for the alternative: a rehabilitation of his status at Old Trafford. The foot injury that derailed the second half of Nani's 2011-12 not only rocked the player, but arguably cost United the title.

Now the certainty is absent. After his tame missed penalty in the recent Champions League match with Galatasaray, Sir Alex Ferguson told journalists that he had "no idea" why he had taken the spot-kick. It summed his current plight up; he seems lost.

At the moment, Nani looks like he needs an arm around the shoulder as he seeks to rediscover his form. Whether United - and Portugal - can take time out to offer that remains to be seen.