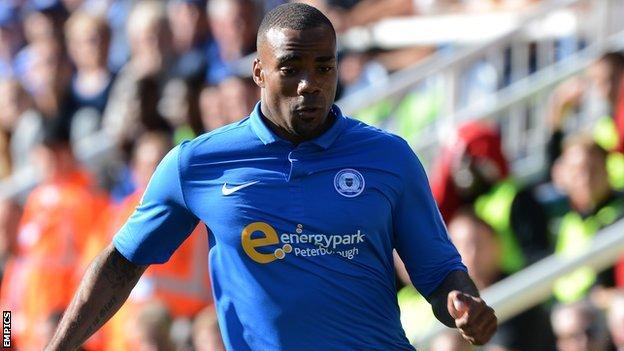 Reports last week suggested the 24-year-old, who scored a hat-trick in last month's had been transfer listed.

"I don't know where that's come from. He's got himself back into the team and he's doing very well," Ferguson told BBC Radio Cambridgeshire.

"I don't know who's put that out there. I was as surprised as anyone else."

Ferguson said he found it unusual that stories regarding the striker's future had emerged when he was enjoying a run in the team.

Three of Sinclair's four starts this season have come in Posh's three most recent fixtures.

"Whether it's come from an agent or something I don't know. It's certainly not come from anyone in our camp," said the Posh boss.

"I suppose you get speculation but the timing of it is surprising."

The Scot added that his bottom of the table side have not opened up contract talks with Sinclair - or any other squad member.

"There's no contract negotiations going on with any player. Absolutely none. It's not the right time," he said.

"We've got to make sure we concentrate on our league position. Everyone's aware of that. There's not going to be negotiations with anyone at the club at the moment."

Meanwhile, young defender Peter Grant is expected to miss the rest of the season with an anterior cruciate ligament injury.