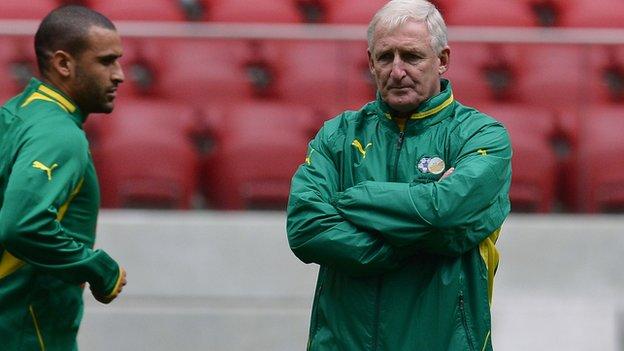 South Africa coach Gordon Igesund says his side still has plenty of work to do ahead of stepping out as Africa Cup of Nations hosts in January.

Bafana Bafana continued their warm-up for the finals when beating Kenya 2-1 in a friendly in Nairobi on Tuesday.

"I'm not overly excited with the win but the effort, performance and attitude were great," said Igesund.

"We are not there yet, we still need to play as a unit - but the boys showed a lot of character."

South Africa took the lead through Tokelo Rantie after 20 minutes, only for Dennis Oliech to level matters from the penalty spot 18 minutes from time following Bongani Khumalo's handball.

Four minutes later, a cross from Bernard Parker - who had helped create the first goal - was deflected into his own net by Christopher Wekesa to warp up the first away win of Igesund's brief reign.

The late own goal meant that Kenya coach Henri Michel started his new role with defeat.

"It was a very difficult win for us, and the pitch was not that playable but it's such conditions that will help us mentally," Igesund added.

"We played the percentage game, not the beautiful game and we pushed them to make mistakes.

"I am just disappointed with the goal we conceded, we should not allow teams to score goals like that. But overall it was a good exercise in terms of what we set out to do.

"I would say at the moment we are about 75% of where we should be."

In January, South Africa will be appearing in their first finals since 2008 - having missed both the 2010 and 2012 competitions because of their failure to qualify.

Igesund made three changes to the side that lost 1-0 to Poland in Warsaw on Thursday, as Wayne Sandilands replaced Itumeleng Khune in goal while Thabo Nthete came in for of Luvhengo Mungomeni and Rantie for Sifiso Myeni.

Despite taking charge of only his fourth match since his appointment in June, the veteran coach believes his squad is coming together with just three months left before the 2013 Nations Cup kicks off in Johannesburg.

"We are taking good strides forward and I was happy with the passion of the players," he said.

"There are still about five or six players that I want to have a look at and then maybe my squad for the Nations Cup will be complete."

The 2013 Nations Cup takes place between 19 January and 10 February.

In Tuesday's other friendly involving an African team, Cameroon - who failed to qualify for the Nations Cup on Sunday - continued their poor form when losing 3-0 to Colombia in Barranquilla.