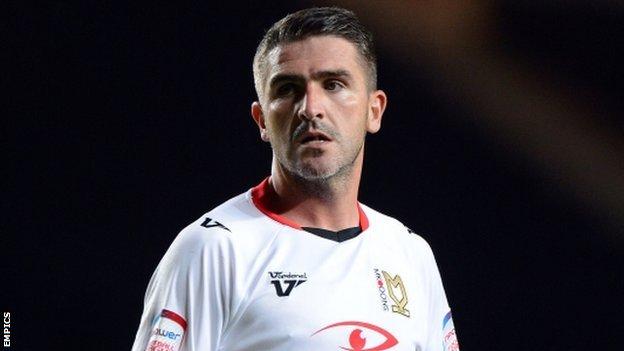 Milton Keynes Dons have made striker Ryan Lowe available for loan, less than three months after he joined the club from Sheffield Wednesday.

Lowe began the season in the Dons line-up but he has not started a game since 15 September.

BBC Sport has learned that the 34-year-old came close to joining League One leaders Tranmere on loan last week.

That deal fell through but Dons boss Karl Robinson is believed to be ready to listen to other offers for Lowe.

The prolific former Crewe, Chester and Shrewsbury striker has won promotion in each of the last two seasons with Wednesday and Bury.

He hit 28 goals for the Shakers to help them get out of League Two in 2010-11, and scored seven goals in his first seven games of the following campaign before joining Wednesday.

Lowe scored nine more goals for the Owls to help them climb into the Championship, before moving to Stadium MK for an undisclosed fee on a two-year contract last summer.