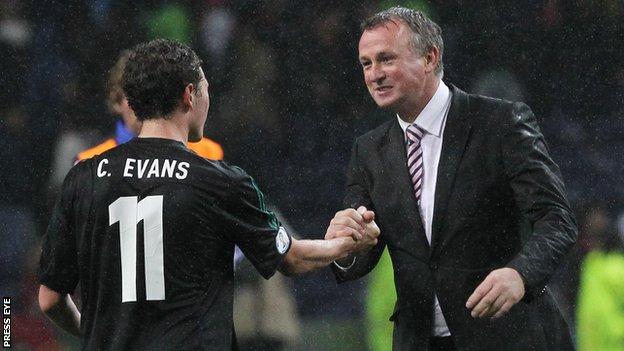 "The biggest challenge in international football is the preparation time," said the Northern Ireland boss.

"There's a sense of trying to get everything done with the players. This time we didn't have that problem."

O'Neill added:"We had more time to prepare to play and I think the players also benefited from only having the one game."

While delighted at his team's display in Porto, O'Neill made clear on Wednesday that he would not be getting carried away.

"It's a start. A great performance. There was a sense of disappointment to lose the late goal in the game against Luxembourg but hopefully this latest result gives us something to build on."

However, O'Neill knows full well that a magnificent display in Porto won't be much use if it is followed by failure to beat Azerbaijan in the next qualifier at Windsor Park in four weeks time.

Despite the heroic displays of those involved in Tuesday's game, O'Neill insists that he could make changes for next month's contest.

"The players understand that there are different systems and approaches based on the opposition.

"We'll go out with a more adverturous approach. It's important for us to win that game."

O'Neill got his tactics exactly right in Porto with Northern Ireland launching a number of counter-attacks in the first half in addition to having to defend stoutly.

Niall McGinn's goal came in one such break as the Aberdeen man produced a composed finish after brilliant work by Jonny Evans and Kyle Lafferty.

"We knew our best opportunities would be on the counter-attack," acknowledged O'Neill

"Jonny had shown great composure in a few instances and he stepped out from the back and it was a great bit of movement from Kyle and a great ball.

"Niall is probably the one player in the team who has the legs and the speed to get up there and he showed great composure with the finish."

While McGinn may not have started had Chris Brunt or Shane Ferguson been fit, O'Neill said he had every confidence in the Aberdeen winger before the start.

"He's scored three goals in four games for his club after coming back from injury and his confidence was high."