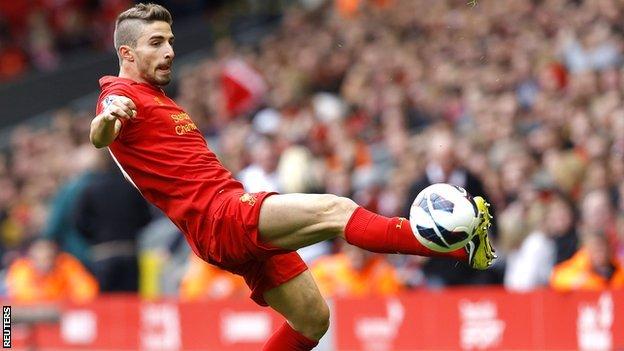 Liverpool forward Fabio Borini needs surgery on his broken foot and is set to be out for around three months.

The 21-year-old, who joined from Roma in July, aggravated the injury while training with the Italian Under-21 squad for their fixture against Sweden last week.

A club statement said: "Typically, an injury of this nature requires a three-month rehabilitation period."

Borini yet to break through

Fabio Borini scored on his Anfield debut in the Europa League on 9 August, but is goalless since then.

Liverpool now have only Luis Suarez available as a recognised striker.

Borini, a former Chelsea trainee, moved to Anfield in the summer for an undisclosed fee reported to be in the region of £11m.

He scored on his home debut in August in a 3-0 win in Europa League qualifying against FC Gomel, but has yet to find the net again.

It is understood Liverpool have the option to recall Carroll from West Ham in January.