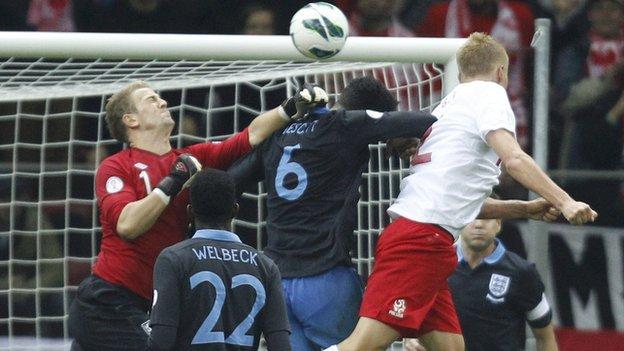 Joe Hart took responsibility for conceding the equaliser which deprived England of all three points against Poland in their World Cup qualifier.

Wayne Rooney's deflected header had put the visitors ahead in Warsaw but Hart then failed to punch clear a corner, allowing Kamil Glik to nod home.

"I came and didn't get there and the lad did a decent header," Hart said.

"It's my fault. I should have punched it or stayed in goal. I didn't do either and it cost us."

The Manchester City goalkeeper added: "They were knocking on the door, but it was never going to open unless there was a mistake."

England are currently top of Group H by one point from Montenegro and three points ahead of Poland, but manager Roy Hodgson's side have played a game more.

The match against Poland had been rearranged from the previous day because of heavy rain and England captain Steven Gerrard believes the home nation coped better with the tricky conditions.

"I think time will tell if it's a decent point," he said.

"The lads are disappointed. We know we can play better. After taking the lead we should have seen the game out.

"Our points tally could be a lot better, but this is a tough place to come. I thought they handled the pitch a bit better than us."