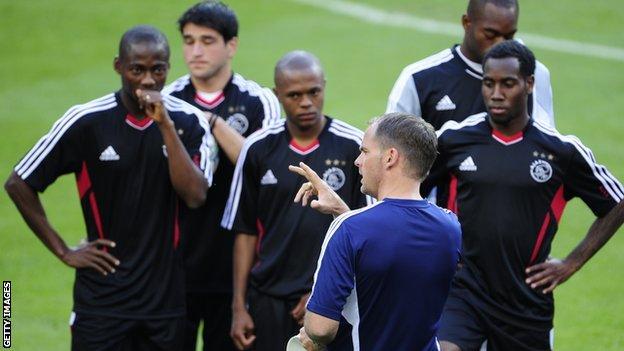 Frank de Boer is definitely enjoying his job as Ajax manager, even though it must sometimes feel like he is trying to finish off a fiendishly difficult jigsaw while someone keeps stealing the final few pieces.

His ambition of re-establishing the illustrious Dutch club as a European force appears a formidable one to fulfil because of their lack of spending power and the constant departure of his best players.

But the financial restrictions the 42-year-old faces compared to say, Roberto Mancini, whose expensively-assembled Manchester City side Ajax face in a crucial Champions League match on Wednesday, mean he has a hands-on perspective that he appears to relish.

"From our Under-12s up to the Under-19s, I know almost exactly what we have," De Boer told me. "I know each of them by name and everything about them. It is very important for me to be involved because in three years they could be one of the top players in my squad.

"Mancini at City is like Jose Mourinho at Real Madrid. They normally buy mature, ready-made players who already have the experience.

"Of course, they are good coaches too so they will also develop players but, in my job, my players are young so I can see them grow as players and men in a small period. For me it is enjoyable to develop them."

It has also become a necessity. Ajax are four-time European champions and possess a rich history but they can no longer compete for players with even modestly-funded clubs from England, Spain and beyond, let alone City or Real, who along with German giants Borussia Dortmund are their rivals in Group D.

These days, they do not even try. With De Boer backed by a dream team of club legends like his assistant boss Dennis Bergkamp and director of football Marc Overmars on his backroom staff, Ajax's directors have put a recent boardroom struggle behind them to create a coaching team built on past glories but focused on a brighter future.

"We have to be creative," De Boer explained. "Normally we have to get players when they are 16. At 18 or 19 it is already too late.

"Our philosophy is that we want about 70% of our first team to have come from our own youth academy. It is our lifeline to survive against bigger clubs, and if we hit that 70% mark then it shows that doing it our way is working.

"We don't spend money if we can help it. We look at the youth teams first and have a policy of giving a chance to our own, rather than trying to sign a player from outside that we have to pay four or five million euros for."

Producing those players is not proving difficult for Ajax's famed academy at the moment, but keeping hold of them is.

It is a perennial problem dating back to their last Champions League triumph in 1995, when Frank and his twin brother Ronald were part of an all-star team that quickly broke up.

In 2012, things are even worse according to De Boer, who saw the likes of Jan Vertonghen and Vurnon Anita leave to join Tottenham and Newcastle in the summer.

There is no way of stopping that talent drain according to De Boer, but he thinks he can delay it.

He uses the career trajectory of current Ajax players Ryan Babel and Danny Hoesen, both back in the Eredivise after unsuccessful stints in England, to show players that staying put could be beneficial.

"We have to accept the big clubs, especially in England but also in Italy, Germany or Spain will see we have a young talented player, and they will buy him," De Boer said.

"But lots of our very young players have left to go to other clubs and countries and normally only two or three percent have a good career. The rest either come back to Holland or you don't hear anything about them.

"At Ajax we give them an opportunity early. It is very important they know the club's perspective is to give them a chance."

It is all about taking small steps as far as De Boer is concerned, and you can understand why. Ajax have only reached the knockout stage of the Champions League twice in the last 15 years so they are a long way off being considered contenders to win it again.

"Of course we can do that with a good group of players," insists De Boer. "If four, five or six come through in one year then that can probably make the difference.

"But normally experience is so important in the Champions League. It's going to be very difficult for us to win it because we don't have the experienced players. They are talented but you need more than that."

Getting out of the group this season would be a start. A tough draw did not make things any easier for De Boer but losing some key players in his 4-3-3 possession-based tactical approach has hurt him more.

"Last year we gave a good performance away against Manchester United," De Boer says, laughing wryly. "But now I have five new players in my team so I have to start all over again.

"I have won the last two Dutch titles so I want to see us make the next step by progressing in Europe. But that is very difficult when our two best players of the season, Jan and Vurnon, went to England.

"Jan was our captain and it is not easy to replace that kind of player. He was just getting to really be our leader but now he is gone. That's why it is so difficult to reach the next level in the Champions League, let alone to win it."

Making the knock-out stages is is still possible but, after losing their opening games against Real and Dortmund, Ajax need at least four points from their back-to-back fixtures with City to kickstart their campaign.

"Can we beat City? Of course," De Boer said. "But we have to stick to our philosophy, and play our own game.

"We are convinced that if we do that and everybody is in good form then, with the talented players we have, we can make it difficult for any club.

"Against Madrid we did not play well, which is why we lost. City's experience could be decisive but, if they have a bad day, we can win."