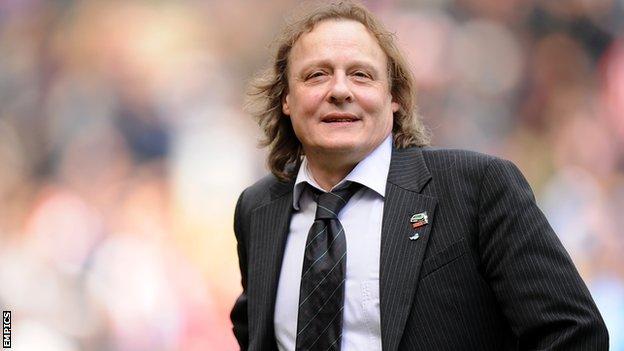 MK Dons chairman Pete Winkelman has said boss Karl Robinson can win promotion this season - but they will not break the bank to do it.

Winkelman is currently focused on completing work on Stadium MK, boosting capacity from 22,000 to 32,000.

"It's not my job to maximise an individual year. My job is to build the club's home for 100 years to come," he told BBC Three Counties Radio.

The Price of Football

"Once we've done that we can be a bit more fleet of foot."

The Dons, currently seventh in League One, have long made it their aim to reach the Championship.

But that ambition has yet to be fulfilled, with Robinson's side losing out in the play-off semi-finals in the last two seasons.

"We have given Karl significantly more budget this year," added Winkelman, who moved now defunct club Wimbledon to Milton Keynes in 2004.

"We identify that we have a great chance this year with the squad we've assembled and the experience of the manager. But I've never risked what I'm doing on one particular year."

Robinson, 32, was the youngest manager in the Football League when he was appointed in May 2010 and he has won admirers for the passing style he has insisted on using at the Dons.

Results have been mixed this season however, with three draws coming in their last three games.

But Winkelman still believes Robinson is the correct candidate to lead MK to the Championship.

"I'm very pleased - we're in a strong position in the league," he said.

"We need to convert our dominance in games into points. If we can do that we've still got every chance this year of achieving our ambition.