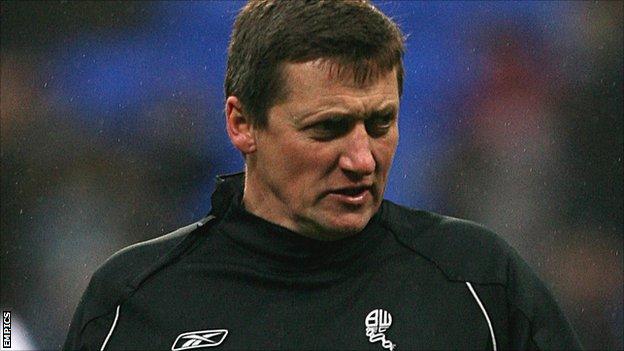 Jimmy Phillips says Bolton are in no hurry to appoint a successor to Owen Coyle, who was sacked last week.

Academy chief Phillips, 46, will pick the Wanderers team to face Bristol City at the Reebok Stadium on Saturday.

He said: "[Chairman] Phil Gartside asked myself and Sammy Lee to take charge of first-team affairs and he's in no rush to appoint a new manager.

"The next manager is going to be a very important decision and it needs to be one that takes the club forward."

Phillips continued: "He recognised the good work that's gone on in the academy and I think he's looking for the club to have a first-team squad that is integrated with players from within, which I'm sure all Bolton fans would like to see.

"He's not in a rush to appoint anyone and, with myself, Sammy and Julian [Darby] taking over, he knows he's got people with the club at heart.

"The three of us all played for the club, myself and Julian are from Bolton and support the club, and we were both ball boys here."

When asked by BBC Radio Manchester if he wanted to take the managerial role on a permanent basis, Phillips said: "That's not a question I can answer at this moment in time.

"It's a results-driven business and it's not a question that can be answered now because we've got to see how we do in the games."

Bolton, relegated from the Premier League in May, have struggled on their return to the Championship and a 2-1 defeat by Millwall, which left Wanderers 18th in the table, was