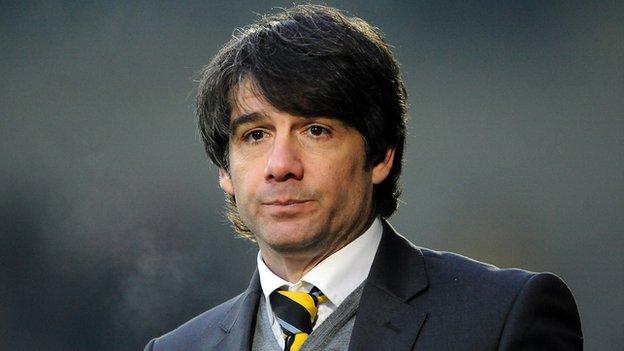 Paul Peschisolido insists that it is far too early to judge Birmingham City this season, despite their poor start to the 2012-13 Championship campaign under new manager Lee Clark.

"We've not even got to Christmas yet," the Blues old boy told BBC WM.

"Everyone's got to be patient as it can still turn around. That's the beauty of the Championship and the lower leagues.

"Look at Wolves. You can't write anyone off. Three wins on the bounce and you're challenging for the play-offs."

Ahead of this Saturday's home date with high-flying Leicester City, Blues find themselves 21st in the Championship table, just three points above the relegation zone.

We've all underestimated the job Chris Hughton did last season. He probably over achieved in the year he was there

But Peschisolido, the husband of former Blues managing director Karren Brady, admits that the continuing saga of the club's off-field future may have had a distracting effect in the dressing room.

"There are a lot of rumblings about the club at boardroom level over the ownership and that can disrupt things," adds Peschisolido, who spent two seasons playing alongside Clark at Fulham.

"I don't know what the issues are there, other than to say that on the pitch it's not happening right now.

"It's not gone according to plan and I'm sure Clarky is as frustrated as anyone.

"There's always going to be expectancy in any team with players of Premier League quality. And sometimes that can get to the players.

"Added to which, the opposition will raise their game against any team with household names."

Peschisolido, still looking for a way back into football following the end of his three-year spell in charge of Burton Albion in March, also suggests that Blues are paying the price for doing so well to reach the play-offs under Chris Hughton last season.

"In a way, we've all underestimated the job Chris Hughton did last season. He probably over achieved in the year he was there.

"Clarky has relatively the same side, but the players are just finding it hard to adjust.

"They've got to become accustomed to playing the way he wants to play. But it's such a tight league and it really is early days."