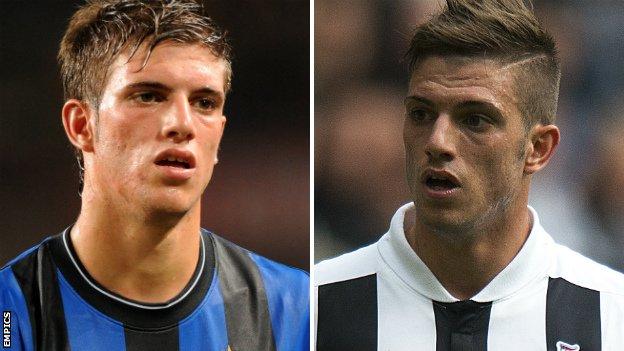 Newcastle United defender Davide Santon believes the rivalry with Sunderland is fiercer than his experience of the Milan derby as an Inter player.

The 21-year-old was still at the San Siro when the Magpies won on Wearside last term but experienced the home atmosphere in March's 1-1 draw.

"The Milan derby is a very important game but not like this one," Santon told BBC Newcastle.

"Here there is more rivalry, everybody thinks about the game, it's fantastic."

less than a fortnight after last year's win at the Stadium of Light, a success that extended their upper hand over the Black Cats.

United have lost just once on Wearside in the last 15 games, a run that stretches back to their Division Two loss at Roker Park in April 1980.

"Sunday we have to win 100%, but it's OK because if we put Shola Ameobi on the pitch and he scores," Santon joked of the striker's seven goal career haul against the Wearsiders.

"It's an important game, that we have to concentrate on and make sure we win. I played the second game [last season], it was fantastic.

"When Shola scored I was so happy for the team because I know how important it is for the fans from the city."