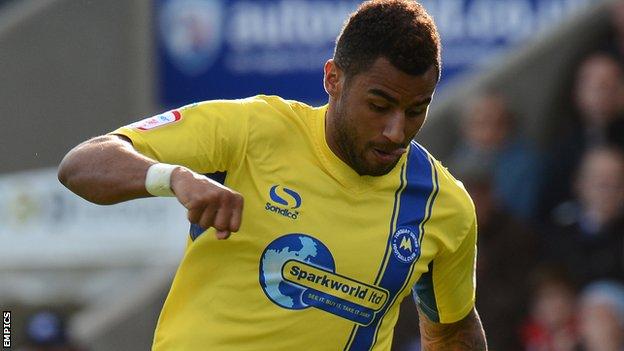 Torquay manager Martin Ling has hailed the contribution of Rene Howe as the striker tries to equal the club record for goals in consecutive league games.

Howe will match Sammy Collins and Carl Airey, who scored in seven successive games in 1954 and 1989 respectively, if he nets at Bristol Rovers on Saturday.

"He's been a real figurehead for us and long may it continue," Ling said.

"You could look at the possibility of 30 goals this season, if you've got nine after 12 games, then why not?"

Howe and scored 14 goals in his first season at Plainmoor.

But aside from his goals, Howe's unselfish work for the team has also impressed his manager.

"It isn't just his goals, the central striker needs to be able to retain the ball and fetch other players into play and he's done that as well," he told BBC South West Sport.

With the record in his sights, Howe wants to go one better than Collins, the club's all-time top scorer, and Airey by netting against Bristol Rovers and in the next game against league leaders Gillingham.

"From about five-in-five people have been mentioning that I could equal the record.

"I'd much prefer it if I could break the record and score eight-in-eight and have my name up there," he said.