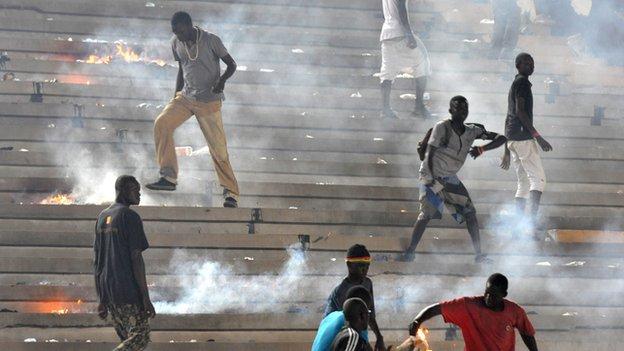 The vice-president of the Senegalese Football Federation has resigned after crowd trouble forced the abandonment of Saturday's home tie with Ivory Coast.

Louis Lamotte was match coordinator for the 2013 Nations Cup qualifier, which was called off with the Ivorians leading 2-0 after 74 minutes.

"I have to take responsibility for what happened on Saturday given my role as match coordinator," Lamotte said.

"So I have drawn my own conclusions and resigned."

A man who is president of Senegal's Professional Football League says his role as match coordinator means he had a 'share of responsibility' for the events that unfolded at Dakar's Stade Leopold Senghor.

After Didier Drogba's second goal doubled the Elephants' lead on the day, as well as giving them a 6-2 advantage on aggregate, Senegalese fans reacted by throwing missiles and lighting fires inside the stadium.

Ivorian fans dropped from the tribunes to the running track around the pitch before taking refuge with both teams, who were huddling for their own protection inside the centre circle.

The match was suspended for 40 minutes while police tried to restore order but the referee was eventually forced to call off the second-leg, final-round qualifier.

The Confederation of African Football has since banned Senegal from the 2013 Nations Cup, in accordance with its statutes, while confirming the Ivorians as 2-0 winners.

The Teranga Lions' failure completes a miserable year for Senegalese football, with the national team losing all its matches at the 2012 finals despite arriving in Gabon and Equatorial Guinea as one of the favourites.

There is also the possibility of further sanctions on the use of the national stadium in Dakar following the crowd trouble, with Togo having been given a six-month stadium ban in 2007 after similar incidents.

"It is more the incidents than the qualifying failure (that pushed me to resign)," said Lamotte.

"The declaration by the head of state, who felt it necessary to apologise to the Ivorian people, shows these incidents were sufficiently serious."

Lamotte told Senegalese media that he is keen to assist any investigation into what happened on Saturday night when it unfolds.