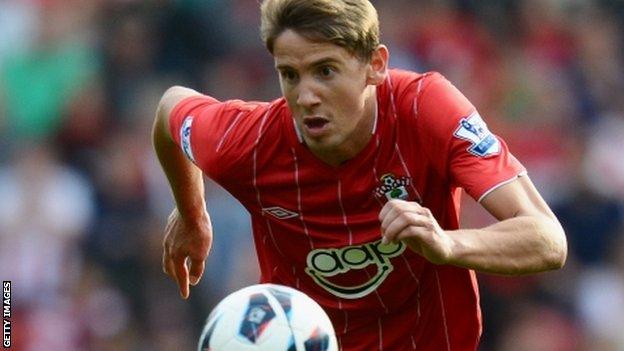 Southampton boss Nigel Adkins says winger Gaston Ramirez could face up to another four weeks on the sidelines.

The Uruguay international, 21, missed their 2-2 draw with Fulham on 7 October after he was treated for a dead leg, resulting in swelling of his thigh.

Adkins said: "Six weeks [in total] is probably about right, but we'll see how he progresses through the rehab.

"If the time is from the medical department, it is from the date of the original injury."

Ramirez is Saints' record signing, having joined on a four-year contract from Italian side Bologna in August for an undisclosed fee reported to be in the region of £12m.

He has made three appearances for the club, scoring in the 3-1 defeat at Everton at the end of last month.

Adkins added: "He is showing good signs of recovery at this moment of time, but he won't be fit for the weekend."

Southampton, who have taken four points from their first seven Premier League games, travel to West Ham on Saturday.