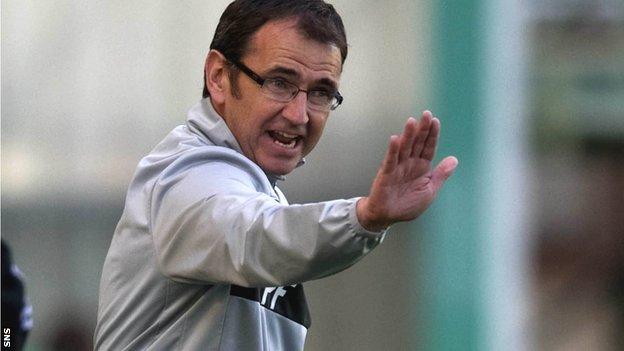 Pat Fenlon believes the Scottish FA should stick by national team manager Craig Levein as the campaign to reach the Brazil World Cup stutters along.

Hibernian boss Fenlon says the problems encountered by Scotland are very similar to those currently being faced by his home country, Ireland.

He said: "If you keep on chopping and changing then you don't get any stability.

"If you are giving someone a job then back the people and let them at it."

Scotland sit bottom of their qualification group after two home draws and two away defeats.

Levein's future as Scotland manager will not be discussed by the SFA until he returns from a week's holiday.

Ireland manager Giovanni Trapattoni eased the pressure that mounted on him following a 6-1 thrashing at home to Germany with a 4-1 away win over the Faroe Isles on Tuesday.

On Wednesday, the Football Association of Ireland said it was backing the 73-year-old Italian.

An earlier win in Group C over Kazakhstan means the Irish are third in the table, on six points from nine.

Fenlon added: "Scotland are probably feeling they have not picked up as much points in the World Cup campaign as they would have liked.

"It's a little bit similar to our [Ireland] games although we are in a little bit better position, having picked up six points."

Fenlon says patience must be shown when it comes to the international team progressing.

He said: "I know Craig Levein quite well and he is a very hard-working man.

"He will be more disappointed than anybody. Sometimes you just need to row back a little bit and give them time to develop."

Fenlon takes his Hibernian north to face Ross County on Saturday and says he is relishing the thought of the trip.

"I have never been up there but I'm looking forward to going," he added.

"They sound like they are a very progressive club and it may be very similar to facing Inverness."

Midfielder Gary Deegan will be missing after the player suffered a broken jaw while on a night out after the victory against Dundee two weeks ago.

The incident is being investigated by police and Fenlon says he will be a big loss to the team.

"I brought him up here and asked him to come and play for this club and live in this city so when something like that happens you feel a little bit guilty," said the manager.

"We will look after him and make sure he gets through it."