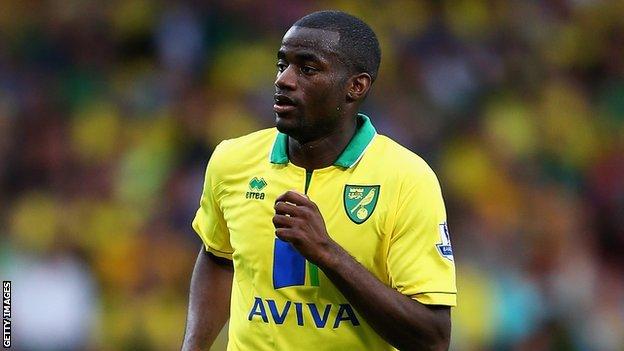 Norwich City boss Chris Hughton has said defender Sebastien Bassong's absence from the Africa Cup of Nations is "terrific" news for his side.

The Canaries have looked more solid with the 26-year-old in the team, with nine goals conceded in the two Premier League games he has missed.

"The bad news is that they haven't qualified, but that's terrific news for us," Hughton told BBC Radio Norfolk.

The competition runs from 19 January until 10 February and a host of African internationals will be unavailable for their sides during the tournament.

Bassong arrived at Carrow Road on a free transfer in August and his influence has impressed Hughton.

"He's been excellent for us. Not only on the pitch but he's been a good influence here at the training ground too," said Hughton, who managed the centre-half at Newcastle.

"He's an experienced player and he uses that experience and he's a good personality. He's settled in very well."

Hughton could have more competition for places soon in a defence that has conceded 17 times in seven league games this term, with the news that Steven Whittaker has returned to training

"It would be better if he was a couple of weeks further on. But he's done a real good week's training with us," said Hughton.

"What he hasn't done of course since pre-season is play in any games. We will look for him to have involvement in a development game on Monday and then take it from there.

"But it's really good to see him back on the training pitch."