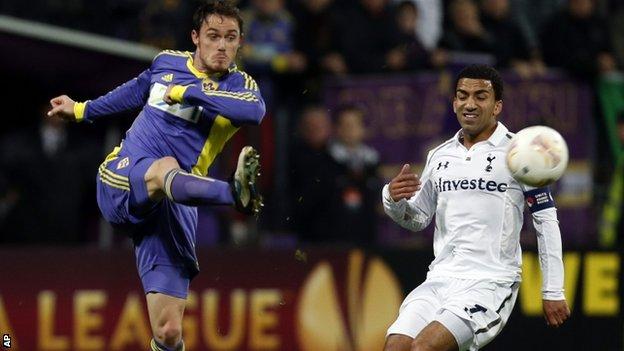 Tottenham remain in danger of failing to reach the last 32 of the Europa League after being held to an uninspiring draw in Slovenia.

Spurs' third straight draw in the competition leaves Andre Villas-Boas's side third in Group J, behind Lazio and their unheralded opponents NK Maribor.

The Slovenians went ahead against the run of play three minutes before half-time when Robert Beric poked home.

Gylfi Sigurdsson equalised close to the hour but Spurs could not find a winner.

This was a lacklustre display from Tottenham who produced a performance that epitomised their faltering progress in this competition: style but no substance, panache but no penetration.

Villas-Boas has made no secret of his desire to win the Europa League and yet with Spurs still to win a match it appears his players do not share their manager's passion. With two home games to come there is time to turn the tide but performances must improve.

So far, Spurs have simply failed to find their rhythm. At the Stadion Ljudski, Villas-Boas's side were again strangely subdued; despite toying with their opponents for much of the 90 minutes, they never looked like delivering a decisive blow.

The first 40 minutes were a case in point. Jan Vertonghen had a header saved, Sandro fizzed a fierce shot narrowly wide from 25 yards and Jermain Defoe fired over as Spurs probed. But for all their possession, they lacked cohesion, confidence and sustained threat.

The Slovenians, beaten home and away by Birmingham last season, chased shadows and yet somehow found themselves a goal up at the interval.

There was an air of complacency about the way Andros Townsend lost possession in his own half, allowing Ales Mejac to set off on a run that took him all too easily beyond both Kyle Walker and Tom Huddlestone and into the Spurs area. A neat flick across goal followed and Beric tucked the ball away from two yards.

From nowhere, Maribor had something to cling to. Hope surged through the stadium as Marcos Tavares and Goran Cvijanovic tested Tottenham goalkeeper Hugo Lloris in the opening moments of the second half. But just as optimism was building, Spurs struck back.

Townsend had made way for Iago Falque at half-time and the substitute made an immediate impact, combining with Sandro before his shot-cum-cross was pushed away by goalkeeper Jasmin Handanovic. Defoe thumped the loose ball goalwards only to see it blocked by Mejac but Sigurdsson bundled the rebound in from a yard.

The goal restored belief to the Tottenham side, but Maribor were in no mood to give in as the game came to life.

Kyle Naughton might have won a penalty with 20 minutes remaining when he fell under a challenge from Milec but the referee chose to book the Tottenham full-back for what he saw as a dive.

Maribor continued to surge forward when the opportunity presented itself. Aleksander Rajcevic burst down the right and found Mejac, who sent a fine low cross towards the penalty spot where Beric failed to make good contact with the goal apparently at his mercy.

Vertonghen thumped a 30-yard shot inches wide as time ticked away but in truth a Spurs' winner would have been unfair on a valiant Maribor side.