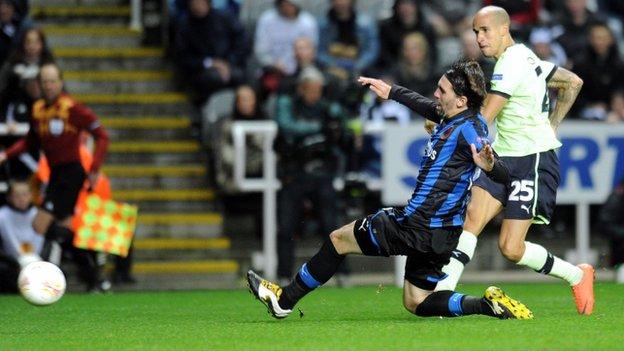 Newcastle strengthened their hopes of reaching the first knockout round of the Europa League with a comfortable win over Club Bruges.

Gabriel Obertan scored the only goal of the game in the second half when he fired a fierce angled shot past Bruges keeper Bojan Jorgacevic.

Magpies striker Papiss Cisse twice went close with a header and firm strike that were both well saved.

The result leaves Newcastle three points clear at the top of Group D.

With two teams to progress from four Alan Pardew's side find themselves in a great position.

Newcastle hogged much of the possession in the first half although Bruges looked assured on the break and twice came close to punishing defensive lapses.

Senegal striker Cisse, who scored 13 goals in 12 games in the second half of last season but has only managed two this campaign, was at the end of Newcastle's best two chances before the interval.

His first was a header from Shane Ferguson's cross that was palmed down by goalkeeper Jorgacevic, and the second was a snap-shot that the Serb saved with an unconventional swat.

Sammy Ameobi, who has impressed Pardew in training recently, provided a taster of what was to come when he galloped past the Bruges defence on the right before cutting inside and firing a low shot that drifted a foot wide of the near post.

He tested Magpies keeper Steve Harper with an early stinging strike and then had a shot deflected over the bar after he pickpocketed Cheick Tiote 40 yards from goal.

Newcastle began with three in midfield but reverted to 4-4-2 after the break when Pardew brought on Shola Ameobi.

It was the one-two with his younger brother that led to the Newcastle goal.

Sammy combined with Shola 40 yards from his own goal and then flicked the ball over his head, raced clear of his defender and played a pass right to Obertan.

The former Manchester United winger powered into the area and released a rocket past the Bruges keeper.

The Belgian club, currently top of their premier league, had one good opportunity in the second half when Lior Refaelov turned inside James Perch and drove a low strike that Harper saved at his near post.