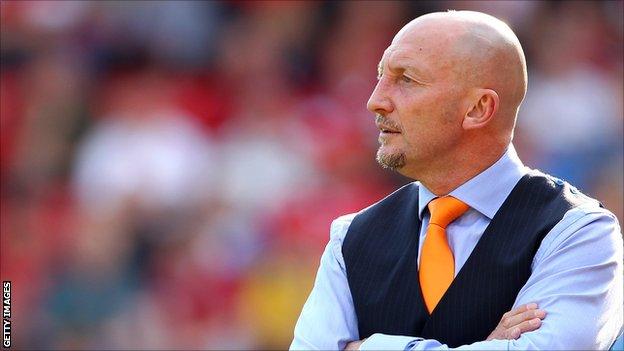 Ian Holloway has brushed off reports linking him with the managerial vacancy at Blackburn as "speculation".

The Blackpool boss, 49, has been one of the names linked with the job at Ewood Park

But Holloway told BBC Radio Lancashire: "The great thing about Blackpool is that we don't deal with speculation.

"The chairman [Karl Oyston] hasn't had a phone call. I know he would have told me about it if he did, so the rest of it is total and utter speculation."

Blackburn have been since Kean's resignation on 28 September.

Earlier this week they who captained Rovers to the Premier League title in 1995, but were rebuffed by Tottenham and are now considering alternative candidates.

Holloway continued: "How it works here is very simple. If someone did ring for me, my chairman would answer the call, he would tell me about it and we would discuss it.

"Last year, that actually happened. He told me of somebody's interest, I thought about it and I told him that I was more than happy to stay here."

He added: "Will I be the Blackpool manager for the rest of my life? No, I can't see that happening.

"I'm very proud to be the Blackpool manager and what I think about other football clubs is nobody else's business.

"At the moment, I'm relishing the opportunity to (on Saturday) and how proud I am of my Blackpool team. The rest of it is complete and utter nonsense."

Holloway became Blackpool boss in the summer of 2009 and led the Seasiders to promotion via the Championship play-offs in his first season in charge.

They would only stay in the top flight for one year, although they put up a brave fight to preserve their Premier League status and were only relegated following defeat at Manchester United on the final day of the campaign.

Despite losing the likes of Charlie Adam and DJ Campbell, Blackpool almost bounced straight back, but they were unable to repeat their Wembley heroics of two years earlier, losing 2-1 to West Ham in the play-off final in May.

Meanwhile, Holloway has called for strong action to be taken against Serbia after two of his players - winger Tom Ince and on-loan striker Nathan Delfouneso - were part of the England Under-21 squad subjected to alleged racial abuse earlier this week.

"I think Uefa and Fifa should come down like a ton of bricks on Serbia," he said. "They've got a record of doing it. That's not me saying it, that's a fact.

"They've not taken any responsibility for their players' or their fans' actions and I think it's absolutely disgusting.

"How they can blame Danny Rose for behaving badly, when all he did was mirror the calls he was getting is absolutely insane.

"I need our game to do something about it because those young gentlemen on that pitch were not safe."