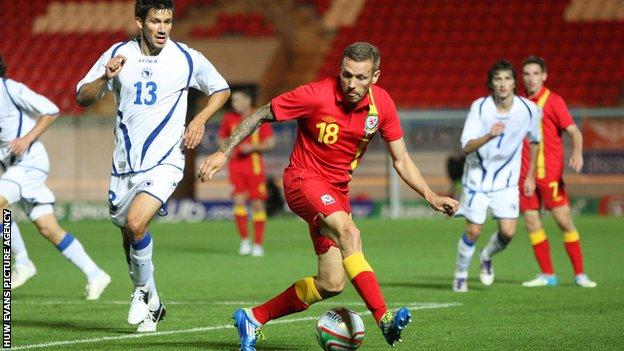 Welsh football chiefs have launched a root and branch review of the way they run the game in Wales.

The FA of Wales governance review will report next summer and could herald big change. Before then they will consult with Welsh clubs, fans groups and other sports organisations, as well as UEFA.

It's the first full scale review since the Hacker Young report a generation ago when many of the independent recommendations were rejected.

This review will be conducted by an FA of Wales panel and so might increase the chances of any suggested changes being accepted.

Manager Chris Coleman has insisted he will not "beg" Cardiff striker Craig Bellamy to continue his Wales career.

The 33-year-old has missed all four of Wales's 2014 World Cup qualifiers because of injury and doubts remain about his international future.

"I don't see why I should, as the manager of Wales, beg any player to play for their country," said Coleman.

"Craig knows the door has always been open for him. Nobody has closed the door on him."

Bellamy, who rejoined Championship side Cardiff from Liverpool in the summer, featured as a substitute for Wales in their 2-0 friendly defeat against Bosnia-Hercegovina in August.

But the former Wales captain did not feature in their defeats against Belgium and Serbia in September while Bellamy, the fifth top goalscorer in Welsh football history, also missed the win over Scotland and Tuesday's Group A loss in Croatia.

Wales have played 122 internationals since Bellamy's international debut but the Cardiff-born player has missed many matches as he manages a long-standing knee injury.

And his recent absence has once again cast doubt on an international career that started against Jamaica in 1998.

Bellamy has scored 19 goals in 69 caps during a 15-year Wales career but missed Cardiff's last game before the international break - a 2-1 win at Ipswich in the Championship, due to a knee injury.

And following Wales' 2-0 defeat in Croatia, Coleman feels any questions about Bellamy's future should be addressed to the player himself.

"If Craig wants to come and play for us and be involved, the door's open and he knows that," the Wales manager told the BBC Sport Wales programme.

"For the four games so far we haven't had him, which is difficult because he's still a good player. Cardiff are playing this weekend, I don't know whether he's fit or not.

"He missed the last game for Cardiff so I know he's carrying a few knocks to be fair. He's not getting any younger, he knows that.

Wales' next scheduled international is a friendly against Austria on 6 February at Swansea's Liberty Stadium before their next World Cup qualifier in Scotland on 22 March.