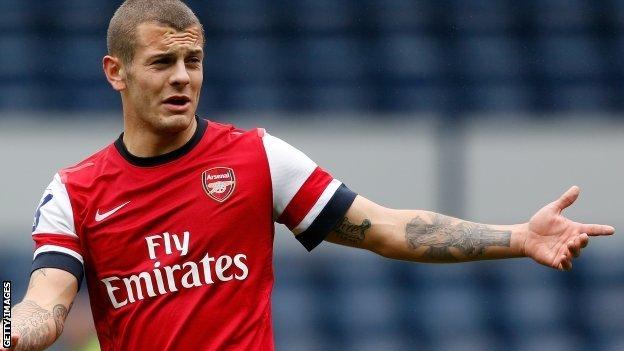 Jack Wilshere will be in Arsenal's squad to face Norwich on Saturday, according to the midfielder's agent.

The 20-year-old has been out for 14 months following ankle surgery after sustaining an injury in July 2011.

However, earlier on Friday, Gunners boss Arsene Wenger said the Capital One Cup tie at Reading on 30 October was a more realistic target for a return.

Wilshere, who has not played since a European Championship qualifying match for England against Switzerland in June 2011, enjoyed 90 minutes in a behind-closed-doors friendly against Chelsea on Wednesday.

And the midfielder's agent Simon Bayliff said on Twitter: "It's been two 'good news' days in a row. Doesn't happen very often. Jack travels to Norwich in the #AFC 1st team squad! Delighted."

Meanwhile, Gunners goalkeeper Lukasz Fabianski has been ruled out for three months after injuring ankle ligaments.

It means Arsenal will continue to rely on third-choice goalkeeper Vito Mannone after Polish international Fabianski, 27, suffered an ankle ligament injury in training on Tuesday.

"He will have surgery but [Wojciech] Szczesny comes back in two weeks," said Wenger.

Fabianski has not played for Arsenal this season because of a back injury and was close to a first-team return before suffering another setback.