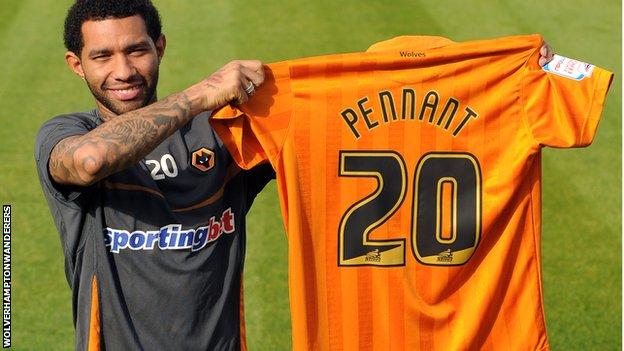 Wolves winger Jermaine Pennant says he is desperate to return to playing after joining from Stoke City.

Pennant played only one league game for the Potters this season before moving to Molineux on a three-month loan.

"There's only a certain amount of training you can do before you start missing the match days, the build-up, the crowd, the atmosphere, the butterflies," he told BBC WM.

For every footballer their aim is to play in the Premier League. I'm no different and you never what it might lead to at the end of my three months.

"No matter what level you're at, you still get that feeling."

The former England Under-21 international, 29, joined Wolves following injuries suffered by summer signings Razak Boukari and Slawomir Peszko, who were themselves bought to supplement Wolves' winger options after Michael Kightly moved to the Britannia Stadium.

Kightly's move meant that first-team opportunities for Pennant were limited this campaign, and the former Liverpool man decided to leave Stoke for Wolves, despite interest from other clubs.

"There were options for me to go elsewhere," Pennant revealed.

"It's better to join a club with great momentum and good morale than a club who are might be fighting and struggling.

"There was good feedback about Wolves. They play good football and the manager likes playing with wingers, so that suited me.

"Sometimes it can be three games a week in the Championship and, when I asked Kites [Michael Kightly], he told me that the training's short and sharp and there's a lot of football, which is good.

"But it's close to home too, they're a great bunch of lads and, overall, Wolves was just the best package.

"Wolves are a big club who have always been tough opposition."

Pennant also added that he is unsure of where his future lies when his emergency loan deal in the Black Country expires in January.

"For every footballer their aim is to play in the Premier League. I'm no different and you never what it might lead to at the end of my three months," he added.