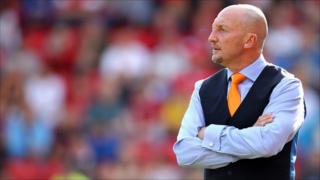 Holloway proud to be Blackpool boss

Ian Holloway tells BBC Radio Lancashire that he is proud to be manager of Blackpool and says he will not entertain any reports linking him with other jobs.

The 49-year-old has been mentioned as a candidate for the vacant position at Blackburn, but Holloway describes it as "total and utter speculation".

He adds that he trusts his chairman, Karl Oyston, to tell him of any interest there may be in him from other clubs.