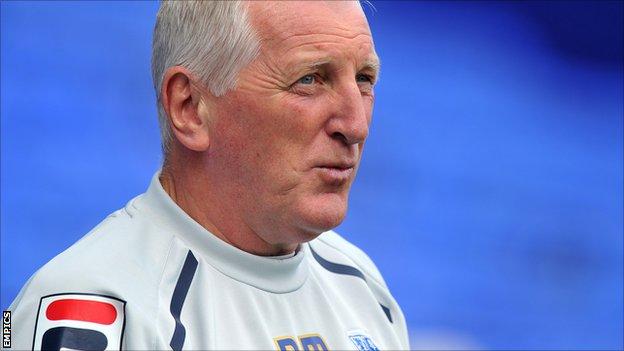 Tranmere manager Ronnie Moore wants goals from centre-backs Ash Taylor and Ben Gibson as they look to build on an astonishing start to the season.

Rovers are the top scorers in the Football League with 29 in 12 games.

"It's great for us that [full-backs] Danny Holmes and Zoumana Bakayogo have both got two goals," said Moore.

"I'm just waiting for those two centre-halves to get on the end of things. They're up for every set-piece and they haven't looked like scoring."

Speaking to BBC Radio Merseyside, Moore continued: "They're both six foot plus and I don't think they've had a header yet.

"It will be interesting to see if we can start getting a couple of goals from them."

Unbeaten Tranmere have only failed to score once in League One this season - in a 0-0 draw at Crewe on 8 September.

extended their lead at the top of League One to seven points, and they could move further clear of the chasing pack with a positive result at Bournemouth on Saturday.

"Targets have to change because of where we are," said Moore.

"I think the chairman would have been happy with 50 points by April, or maybe a little bit earlier, but the way we're going, we could have them for Christmas.

"We're playing games and winning games at this present time. If we keep playing like that, we've got a chance.

"A lot of people are just waiting for the bubble to burst and we've got to make sure it doesn't."

He added: "We're a quarter of the way through the season and we haven't done anything or won anything, but we're in a fantastic position.

"I don't think anybody in the Football League would have thought that we would be top of the league by seven points in October, but we are. The hard part now is trying to stay there."

With striker Jean-Louis Akpa Akpro out until Christmas with a broken foot, and wingers Andy Robinson and Joe Thompson carrying minor niggles, Moore is hoping to add a loan signing to his squad before the trip to the south coast.