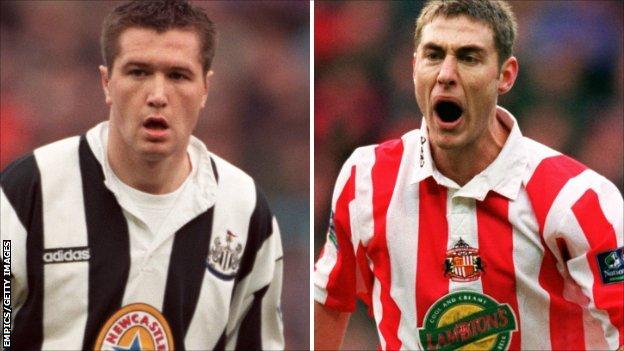 Steve Howey knows more than most about the ferocity of the footballing rivalry between Newcastle United and Sunderland.

The former England defender grew up in a Sunderland-mad family, but made 242 appearances for Newcastle United during a 16-year professional career.

And despite sampling further local derbies with Manchester City, Leicester City and Bolton - nothing quite compared to the Tyne-Wear version.

"You've got same-city derbies, including the Manchester derby which I played in, but the Sunderland-Newcastle derby is the biggest," he told BBC Newcastle.

"When you are from an area you know what it means and it's extra special.

"Every time I played against Sunderland I never lost, and because all my family's from Sunderland when you're in the first team you want to win that bit more.

Sunderland were in-form coming into the game, but were blown away by a Kevin Nolan-inspired Magpies. Newcastle led 3-0 at half-time thanks to a brace from Nolan and Ameobi's spot-kick, and Titus Bramble's sending-off in the second-half handed the game to the Tynesiders. Ameobi then scored again before Nolan completed his hat-trick - and not even Darren Bent's consolation could spoil the party.

"To get that win is great, but for fans it's a nightmare if you lose because it's so long for the next one to come round.

"It's bragging rights and a massive boost if you win. The lads from the area will be telling the other lads exactly what it means."

Originally from Manchester, Makin featured in Sunderland's 2-1 wins at St James' Park in 1999 and 2000 during a four-year stay.

"When we won there everyone loved us, we were gods for a week," Makin said.

"It gives the city a massive boost. We went out after the 2-1 and got mobbed, we couldn't move and the whole town was out."

The Magpies will be looking for a repeat of last season's visit to Wearside, when a Ryan Taylor free-kick claimed a 1-0 victory for Alan Pardew's side.

However Sunderland were unfortunate not to come away with all three points in March's 1-1 draw when Shola Ameobi netted in the final minutes.

"Shola gets some abuse but he always seems to score against Sunderland," Howey added.

"If he doesn't start he'll definitely come on because the manager knows he's got a knack of scoring against them."

Despite their home advantage, Sunderland have a disappointing record against Newcastle on their own turf - with one win in 15 games stretching back to April 1980.

However a sell-out crowd, and the movement of away fans to the upper reaches of the North Stand suggests Newcastle will be entering a red and white cauldron.

"It's going to be an unreal atmosphere, it will be fantastic," said Makin.

"It's such a big game, you've just got to try and treat it as a normal game.

A hero was truly born when Sunderland routed their rivals on their home turf, with local-lad Gary Rowell rattling in a hat-trick. Wayne Entwhistle was on target with the fourth, while John Connolly recorded the sole Newcastle goal. The Wearsiders finished just outside the promotion places, one point behind Stoke who returned to the top flight.

"The team that usually does well is the one who keep their heads. As a player you need to keep your head."

All eyes will be on the club's respective frontmen, particular Demba Ba and Steven Fletcher who currently lead the scoring charts with six and five goals respectively.

"Martin O'Neill is in now and has done a good job, and they have Fletcher who has hit the ground running," said Howey.

"With Newcastle, Demba Ba will come to the fore, so both defences will have their work cut out."

Coincidentally both clubs come into the game on the back of defeats by the two Manchester clubs - the Black Cats beaten at City and the Magpies slipping to a loss at the hands of United.

"It's come at a great time because both sides played poor in their last games, but Sunderland will need no motivation and it's set up to be a fantastic game."