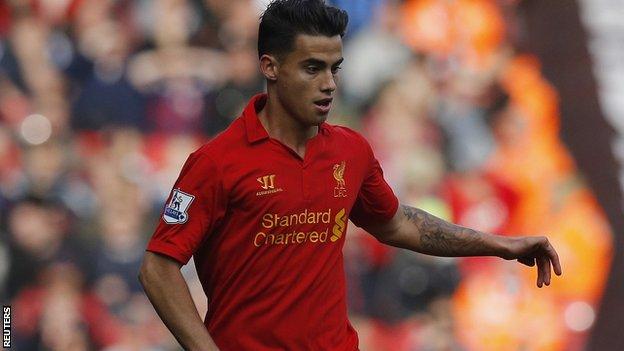 Spanish playmaker Suso has pledged his future to Liverpool by signing a new contract, which the Anfield club describes as "long-term".

Suso, who signed from hometown club Cadiz in 2010, has impressed in the early weeks of the season.

At 18, he has demonstrated outstanding technical qualities but also shown very good temperament

"I am really happy," the 18-year-old told the club website. "Liverpool are one of the biggest clubs in the world and this is the right place for me.

"I had no questions about signing and I am really glad to have done so."

The midfielder added: "I am happy Brendan [Rodgers, manager] has shown trust in me.

"I am comfortable here. I have played some games for the first team and I hope to continue doing that, but I need to work hard every day for that to happen. This is one of the best days of my life."

The Spain Under-19 international made his first-team debut in September's Europa League victory over Young Boys and made his first Premier League start nine days later.

With surgery on a fractured foot ruling out forward Fabio Borini for up to three months, Suso is expected to get many more first-team opportunities.

"At 18, he has demonstrated outstanding technical qualities but also shown very good temperament to play for such a prestigious club," explained Rodgers.

"His commitment is very good news for all our young academy players and the excellent work by the academy coaches and staff."