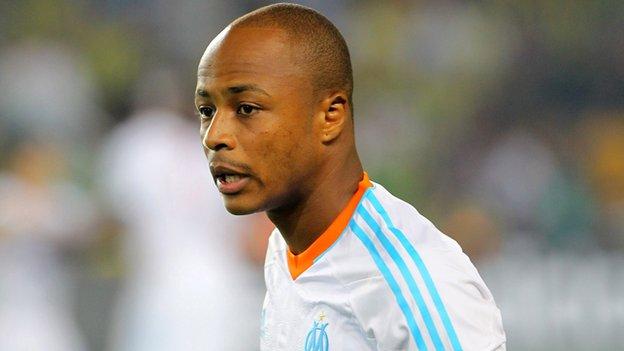 The Ghana Football Association has threatened to sanction midfielder Andre Ayew if he does not apologise for his reaction to being substituted during Saturday's Nations Cup tie with Malawi.

The 22-year-old angrily shook his head as he came off the pitch in Lilongwe.

He also demanded to know from the technical team why he was being taken off when he was not tired.

He is believed to have offered a half-hearted apology to the team's management in a meeting that evening.

But it did not go down well with the Ghana FA and now the governing body has told him in writing he must apologise or he will be punished.

The Marseille midfielder has acknowledged receipt of the communication and is due to issue a response.

Ghana FA sources have told BBC Sport that the nature of the sanctions will be determined by coach Kwesi Appiah and that they could range from a cash fine to suspension from the team.

Ghana won the final-round second-leg qualifier 1-0 to secure their place at next year's tournament South Africa.

Ayew, who is the reigning BBC African footballer of the Year, is in line to play in his fourth Nations Cup.