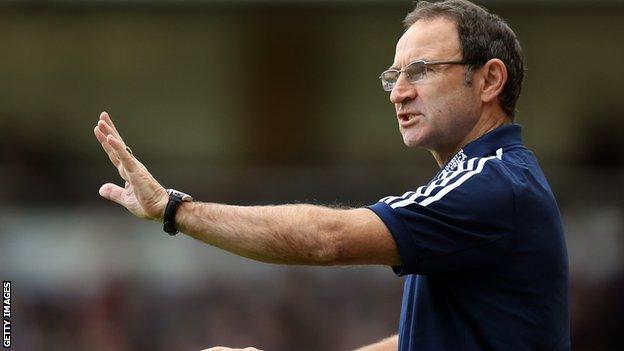 Martin O'Neill believes Sunderland should take a leaf from Newcastle's book and aim for a place in Europe.

Having won promotion to the Premier League at the end of the 2009-10 season, the Magpies have kicked on and qualified for the Europa League.

Black Cats manager O'Neill now wants his side to emulate their north-east rivals, who they host on Sunday.

"We should take our lead from them in that sense," said O'Neill ahead of the Tyne-Wear derby at Sunderland.

Sunderland's one and only appearance in Europe came in the 1973-74 season when they overcame Vasas Budapest over two legs in the first round of the European Cup Winners' Cup before losing to Sporting Lisbon 3-2 on aggregate in the second round.

Newcastle, who qualified for the Europa League after finishing fifth in the Premier League last season, have already defeated Atromitos Athens and Bordeaux in this season's competition, and entertain Club Brugge on 25 October.

"This time last year, I wasn't working, so I was looking at it from afar, and perhaps when the results were coming in each weekend and Newcastle were still going strongly, I maybe felt, like a lot of people, they would do well to keep it going," added O'Neill.

"But they did, they kept it going. They deserved all the accolades going, there's no question about that. That's not to defuse any situation, that's just how I view it.

"It was terrific. Alan Pardew was Manager of the Year and deserved that, so it was a terrific effort.

"It should give us the type of lift that we would need around here because our aim is at some stage or another to be at least the best side here in this part of the world, that's number one."

O'Neill plans to talk to Danny Rose before deciding whether to start the 22-year-old defender, who is on loan from Tottenham Hotspur.

Rose was sent off after the final whistle of England Under-21s' European Championship qualifier against Serbia on Tuesday, and called for Serbia to be banned after claiming he was racially abused by fans in Krusevac.

"I will give him the opportunity just to let things lie for a day or two and I will speak to him closer to the time and see what frame of mind he is in," said O'Neill.

Five Newcastle players were booked the last time the clubs met while Sunderland's Stephane Sessegnon and Lee Cattermole were sent off, and Magpies manager Alan Pardew is calling for cool heads both on and off the pitch on Sunday.

"There is a little bit of passion flying about and it needs to be conducted in the right manner by players and staff alike," said Pardew.

"But emotions sometimes get the better of you, like it did with me at the end of last season's game when we scored in the last minute. It's an emotive game, we want to win.

"Both myself and Martin will be very keen that 11 men end the game. You have got to control your emotions because at some point, there will be a flashpoint in the game.

"There will be a tackle that's mistimed and probably look worse than it is, and it will be how you behave when that incident occurs."