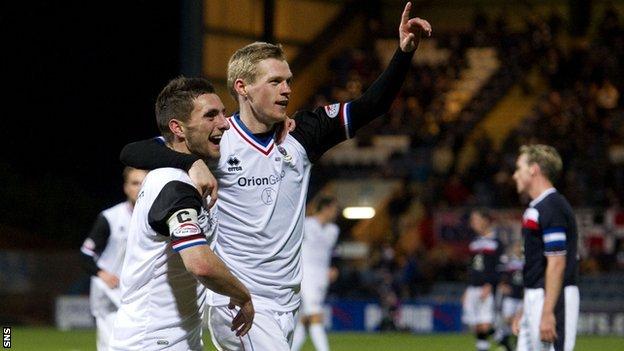 But Butcher was delighted with a third straight win and praised his side's recent scoring form.

"It's only comfortable when we get the fourth goal at the end," said Butcher.

Early goals by Billy McKay and Gary Warren put the Highlanders in control at Dens Park before Colin Nish pulled one back for the hosts.

Andrew Shinnie netted from the spot after Shane Sutherland had been fouled in the box and McKay added a late fourth.

And Butcher was pleased with how his team responded to the absence of injured captain Richie Foran.

"Everybody's got a great attitude but everybody plays with a smile on their face. They really enjoy the training, they enjoy the games. They know their jobs very well.

"Four-one looks a comfortable win, it certainly wasn't comfortable. Dundee are spirited. At 2-0, we were wondering, 'what's going to happen next?' And then Dundee scored.

"[Goalkeeper] Tony Reguero had to make some really important saves. I didn't think Dundee were ever out of it at all.

"We kept going in the second half and Andrew Shinnie was on fire and Billy McKay as well."