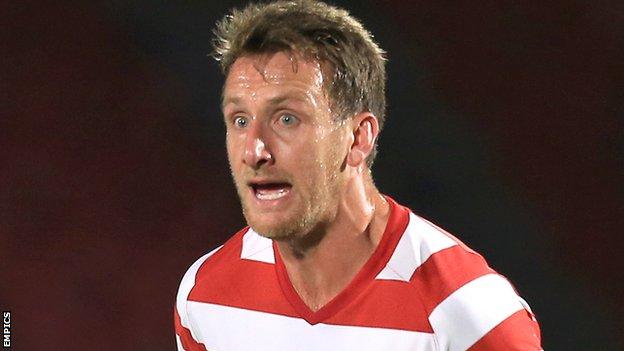 After a quiet first half, Lee Hughes went close for Notts before Rovers took control with two goals in two minutes.

Moments after Kyle Bennett put his free header wide, David Syers crossed for Paul Keegan to plant his header past Bartosz Bialkowski in the Notts goal.

Half-time substitute Chris Brown had time to turn in the box to fire in Doncaster's second.

The Magpies had to play the last 17 minutes with 10 men after Jordan Stewart limped off with a hamstring injury as manager Keith Curle had already made his three substitutions.

This was a fourth home league defeat of the season for Notts and they slip to sixth, now six points behind Tranmere.

Doncaster won for a third straight game and extended their unbeaten run to five matches.

"If I am honest about it, poor defending, shocking defending and no desire to stop the ball going into our box.

"We did not track people when they were in our box.

"I just thought we were ruthless today.

"It was a real professional team performance and the players worked hard.

"I don't think Notts County really had a shot for Gary Woods to save and they're a good team.

"We were quite comfortable, scored two good goals and Kyle [Bennett] missed an open goal so we could have had a few more."