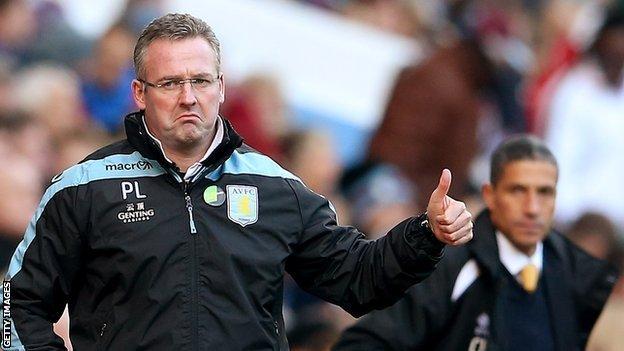 Lambert, who left City in acrimonious circumstances in the summer, saw his side take a first-half lead through Christian Benteke's cool finish.

But the game turned seven minutes after the break when Villa's Joe Bennett was sent off for a second booking.

And, after sustained pressure, Turner's header earned a deserved draw.

Relentless second-half Norwich domination had threatened to overwhelm a Villa side who had taken the lead against the run of play.

And Lambert will be relieved to earn a draw, even though it means Villa's start to the season is the club's poorest to a campaign for 43 years and leaves them hovering just above the Premier League relegation zone.

Although the vast majority of the pre-match build-up had concentrated on Lambert's Carrow Road exit, he had insisted this was "just another game".

The Scot and Norwich are both suing each other for breach of contract and the matter is to be decided by a Premier League managers' tribunal.

But the apathy with which the Norwich fans greeted Lambert suggested their main feeling was of respect and gratitude to a man who had won them two promotions and masterminded such an impressive first season back in the top flight.

And with just one win apiece from a combined total of 16 league games, and both sides struggling, neither team could afford to be distracted.

Heavy defeats against Liverpool and Chelsea had left Canaries fans preparing for a miserable season, but last Saturday's fine 1-0 win over Arsenal seemed to have renewed their belief and an unchanged side looked busy, confident and dangerous in the opening stages.

Grant Holt, the matchwinner against the Gunners, led the line impressively and he and the busy Wes Hoolahan posed constant problems for a reshuffled and injury-ravaged Villa defence.

Hoolahan should have put the visitors ahead when sent through by Holt's clever pass, but keeper Brad Guzan came out quickly to make a decent block with his feet.

Villa appeared nervous, struggling to retain possession, and their edginess was beginning to transmit itself to the home support.

But they took the lead with their first meaningful attack on 27 minutes after a mix-up involving both Norwich centre-backs.

Sebastien Bassong and Turner allowed Benteke too much space and the striker, who was preferred to Darren Bent up front, sent keeper John Ruddy the wrong way with a calmly slotted finish after good work by Joe Bennett.

Lambert's side finally settled and briefly threatened to build on their lead. Benteke had a header comfortably saved after the interval, but when Joe Bennett was dismissed after picking up a second caution for blocking Elliott Bennett, Norwich seized complete control.

The excellent Hoolahan went close on a couple of occasions, Holt was denied by Guzan when through one on one, and only some inspired Villa defending - particularly from Ron Vlaar - kept the visitors at bay.

"A lively second half made up for a generally lacklustre first. It ended honours even but Norwich had the chances to win it. Villa defended so stoutly and Paul Lambert will be relieved to get a point, but Norwich will feel they should have gone on to win."

But finally the pressure told and Hoolahan was inevitably involved in the equaliser, finding the head of Turner with a delightful right-wing cross following a quickly taken short corner.

More Norwich chances followed but Guzan made several decent saves, defenders blocked a series of long-range efforts and Villa were able to hold on.

"I think the sending off changed a lot. That changed the game.

"At first thought I thought it was a sending off, because when you commit a foul and you go to do something, then you put yourself in a position where you can get the red.

"But, looking at it again, I think Elliott, too, has had hold of Joe. It was a bit of an even contest and I think the two of them were at it.

"I haven't had the chance to talk to the ref [Phil Dowd] about it yet. I've only just watched a tape of it. But I thought the team were brilliant with the way they defended strongly after that.

"Will Villa will be okay? I have great belief we'll be totally fine."

"I think it was two points that got away. When you are 1-0 down, you are delighted to get back in the game.

"If it's 0-0 and you have the pressure we had at the end, you are more disappointed.

"You can look at the game apart from possession, balance of play and amount of ball in the final third, as one of three clearcut chances.

"They had one and Benteke put it away. We had two with Wes Hoolahan and Grant Holt and we didn't but I thought having gone down 1-0, we came out second half with a good attitude and forced the issue.

"I think I would have been confident enough we would have got back in the game even with 11 men."