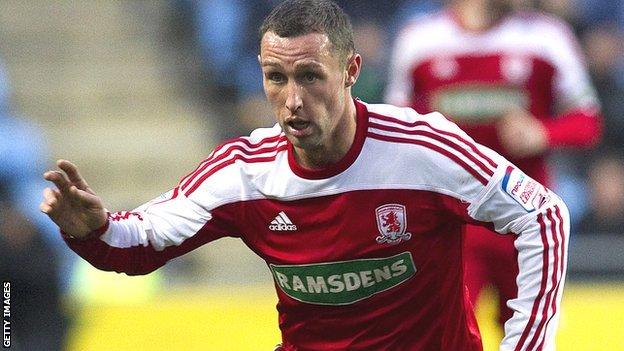 Substitute Scott McDonald scored both goals as Middlesbrough came from a goal behind to overhaul Bolton and win their fourth successive league game.

The Australian, on for Marvin Emnes, stabbed in his first after goalkeeper Adam Bogdan spilled the ball.

Chung-Yong Lee's clever finish had earlier given Bolton the lead, but the hosts were always on top.

Tony Mowbray's side remain third, but only on goal difference after leaders Leicester slipped to defeat against Crystal Palace and it was a game that will have fuelled promotion hopes on Teesside - as well as underlining the task facing

The Scot, who watched from the stands before he officially takes over on Monday, saw a powerful Chris Eagles strike go close in the opening two minutes for the Trotters, but his side were mostly penned back before Chung-Young struck against the run of play in the 43rd minute.

McDonald nodded wide and his side had a penalty claim waved away when the ball appeared to hit Sam Ricketts on the arm.

The winner finally arrived in the 85th minute as McDonald worked his way free of markers in the box and headed in, to the delight of the home fans.

"I was pleased at half-time despite the Bolton goal because of the application, the attitude and the chances we had created.

"I was even more pleased because the atmosphere in the dressing room at half-time was very positive.

"We all felt that if we could create and score the next goal then we could go on and win it and so it proved.

"We worked very hard to overcome the adversity in going a goal down and we bounced back and got the job done."

"It is not my place to advise Dougie Freedman on what he needs to do but I will say he has a good squad here to work with.

"The 'goals against' column needs addressing, we know that. We need to be stronger at the back and we are creating chances but maybe need to be a bit more ruthless and mentally tough in front of goal."