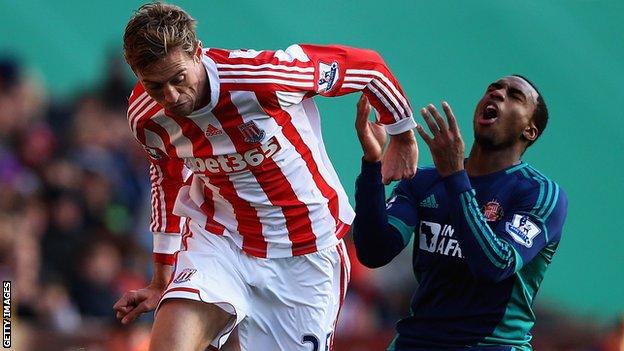 Sunderland were denied a penalty in a goalless encounter with fellow draw specialists Stoke.

The hosts were the better side but were lucky to escape when Robert Huth handled Steven Fletcher's second-half shot at the Britannia.

Black Cats keeper Simon Mignolet produced a double save to deny Stoke's Charlie Adam and Ryan Shawcross before the interval.

Stoke lost Marc Wilson, who was taken to hospital with a broken leg.

Play was held up for five minutes early in the second half while the defender received treatment on the pitch, before he was eventually carried off on a stretcher and replaced by Andy Wilkinson.

It summed up a frustrating day for the hosts, who have now drawn six of their first nine league games, the same tally as Sunderland, who have played a game fewer.

While the visitors will argue they should have had a penalty for Huth's intervention, Martin O'Neill's side created few chances and have now won only once in 16 league outings.

Quality was in short supply in an opening 45 minutes littered with misplaced passes.

The first-half highlight was a terrific double save by Mignolet to deny the Potters the breakthrough.

This is not a match that will live long in the memory. In a game of few chances, Stoke will feel they should have won although the hosts were relieved when the referee decided against pointing to the penalty spot after Robert Huth handled Steven Fletcher's shot inside the area.

The Belgian did well to punch Charlie Adam's curling free-kick away but the ball fell to Ryan Shawcross who then forced Mignolet into a diving stop.

Sunderland, who arrived in the Potteries without an away win in the Premier League since they visited the Britannia on 4 February, failed to force Asmir Begovic into a serious save before the interval - although Stoke's Bosnian keeper had to be alert to cut out Craig Gardner's dangerous low cross before it reached Jack Colback.

The game, scrappy and disjointed in the first half, threatened to become a bruising affair in the second when former Black Cats midfielder Dean Whitehead was responsible for an ugly challenge on Sebastian Larsson, earning the Stoke man a yellow card.

The match finally came to life in the closing stages, Fletcher's shot striking Huth on the arm inside the Stoke area.

But referee Mark Halsey was not interested and Huth responded by forcing a save from Mignolet with a header, while Michael Kightly spurned another Stoke chance in the sixth minute of stoppage time.

Peter Crouch is the only Potters player to have scored at the Britannia Stadium in the Premier League this season. He has netted all three goals.

"I think a big thing today is that having gone to Manchester United and defended so poorly last week (in a 4-2 defeat), we actually looked really solid.

"I don't think Asmir Begovic has had a shot to save. So that has been a bonus, but we just need a break in front of goal."

"I've seen it back briefly (the penalty appeal). The truth is, I thought if it had been given against us, I might have been none too pleased.

"I think he has tried to keep his arm there, although if it misses him, it is in the net. I'm not sure it was a deliberate handball."

"It was a difficult game played in difficult enough conditions, with the wind swirling around.

"We have drawn a lot of games this season and we are just unable at the moment to turn one or two of those draws into victories."