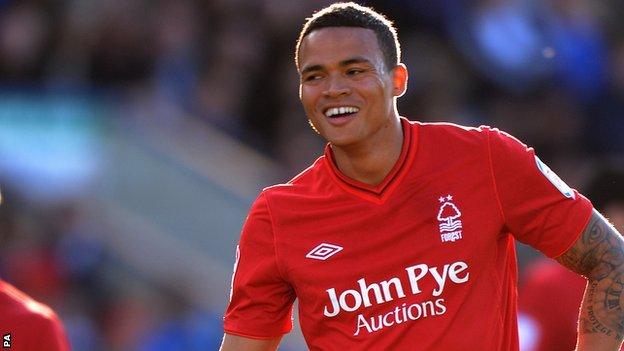 Nottingham Forest scored three goals in a blistering 10-minute spell before the break as they came from behind to beat Barnsley and move up to seventh in the Championship.

Marlon Harewood's close-range finish against the club he has represented in two separate spells put Barnsley ahead.

But Greg Halford equalised with an 18-yard shot, Simon Cox added a second and Chris Cohen's strike made it 3-1.

Jermaine Jenas sealed victory in what may be the last game of his loan spell.

The Tottenham midfielder's loan spell is now officially over, but if a deal cannot be agreed it was a fitting way to end his second spell at the club where his career started.

The Reds were emphatic winners but they began slowly and fell behind to a fine breakaway goal midway through the half.

Stephen Dawson burst forward from the edge of his own box and found Jacob Mellis, whose precise pass set Harewood away to round Lee Camp and roll the ball home.

Harewood refused to celebrate in front of the travelling fans, but their mood had changed dramatically by the break.

First Halford made it 1-1 when his weak shot took a deflection off Scott Wiseman and wrong-footed home keeper Ben Alnwick.

Nottingham Forest midfielder Andy Reid's appearance means he has started a league game for the 300th time in his career.

Then four minutes before the interval Cohen fed Sharp, and when Alnwick could only parry his effort, Cox tapped in the rebound.

A stunned Barnsley side then conceded a third goal on the stroke of half-time when Cohen produced a stunning 25-yard strike into the top corner.

O'Driscoll's side stayed in control after the break despite a few scares - most notably when Forest keeper Camp made a fine sprawling save to deny Kelvin Etuhu.

And Jenas, a 70th-minute substitute, raced through to add the fourth with 12 minutes left, producing a superb chipped finish.

"We're in the same position as we were yesterday - trying to punch above our weight.

"Take the emotion out of it, you can't give a good team bad goals, and that's what we've done today. The players are responsible for the decisions they make on the pitch and they made bad decisions today and it's cost us the game. We got a one-goal advantage and then we imploded.

"But I haven't got the same agenda as Nottingham Forest. On paper, it's not a real match-up when you look at Nottingham Forest compared to ourselves. I'll admit it, they're a better side than us.

"It's difficult to pick my best 11, it's still forming and we've had suspensions. You take one step forwards sometimes and two steps back.

"But regardless of the score, I thought our approach was good, our attitude was good. They're a team that if you let them get fluid they're able to pass the ball, and we stopped that.

"I know Jermaine Jenas is a Nottingham boy, but for somebody that has played at the level he has - you always worry when a big-name player comes to your club but he's been first-class.

"His attitude has been first-class. He's training really hard, he's got fitter as the month has gone on.

"He's come on and he's made a difference for us. I'm delighted he's got a goal, it will give him great confidence after such an injury-ravaged couple of seasons."