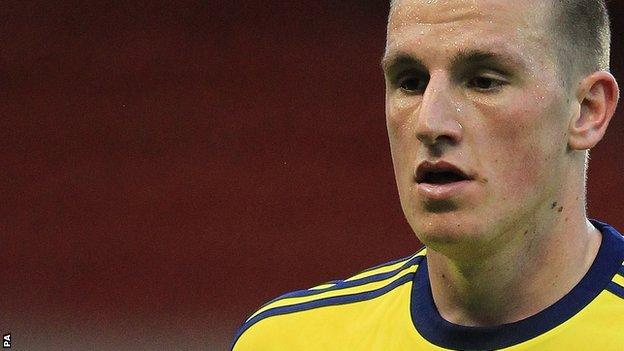 Wood slid the Lions into the lead before the interval and he made it 2-0 with a well-taken counter-attack goal.

And after Huddersfield had Jack Hunt sent off for violent conduct on 85 minutes, Liam Trotter's curling shot sealed a resounding victory.

The result sees the Terriers drop a place to eighth in the table, while Millwall move up to 15th on the back of their fourth league win of the season.

Millwall started slowly but Wood, who is on loan from West Brom, went close to giving them the lead before he opened the scoring after great work by Darius Henderson.

Keith Southern should have levelled the scores but could only fire over from close range while Jermaine Beckford was unlucky with a shot from a tight angle.

New Zealander Chris Wood has now scored five goals for the Lions, the fifth club he has played for on loan since moving to England in 2008.

Huddersfield controlled possession early in the second half but the Londoners withstood the pressure and made it 2-0 on the break when they outumbered the visitors and Henry fed Wood for a neat finish.

Wood then turned provider, unselfishly laying off the ball for Henry who produced a calm strike from deep inside the box.

Huddersfield's best chance of the second half came late on as Adam Hammill fired a shot straight at keeper David Forde.

But a miserable day for the visitors got even worse late on as Hunt saw red and Trotter's wonderful strike made it 4-0.

"The result pleases me a lot. It was a tight game for quite a long time and I couldn't necessarily see the 4-0 coming.

"The second goal was a very good goal from our point of view after we'd been under a bit of pressure and I think that's what killed the game off. I couldn't see us losing once we'd got that second.

"I thought Darius Henderson was terrific up front. He hasn't got on the scoresheet himself but his link-up play with Chris Wood was really good.

"Chris is a goalscorer and he has produced two very good finishes today but I think even he will say that he has got the perfect foil in Darius.

"We have got Chris on loan from West Brom but there has been no dialogue between the two clubs as yet about that going any further."

"It was the last 25-30 minutes that killed us - we lost a bit of our discipline. In the first half it was fairly even and I think we felt a bit unlucky to be a goal down at half-time.

"But some of the players lost their discipline and we were pushed. They're upset but we've talked to them about it in the dressing room and we'll try to make sure it doesn't happen again.

"Jack was sent off for dissent. He felt he'd been fouled and the referee has sent him off for what he has said. In fairness, he's apologised to the rest of the players and put his hand up to that one.

"I think it's in the heat of the moment - we've all done it - but he recognises he's made a mistake.

"We've got a good team here but the last two away games have been disappointing. We've got a bit frustrated today because we were creating chances but nothing was quite dropping for us."