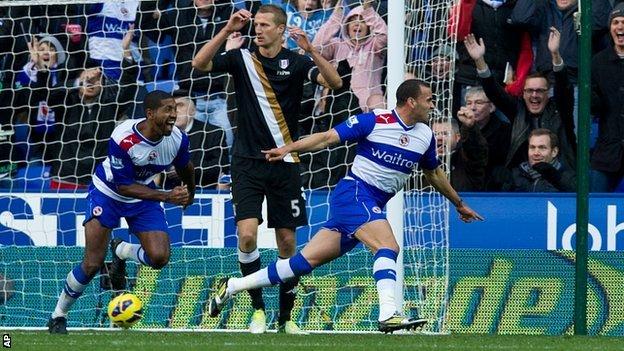 Hal Robson-Kanu's last-minute goal clinched a point for struggling Reading after a riveting encounter with Fulham.

A thunderous drive from Mikele Leigertwood gave the Royals a deserved half-time lead.

But Fulham fought back to go ahead through substitute Bryan Ruiz and Chris Baird before Garath McCleary got Reading back on level terms.

Dimitar Berbatov's low shot looked to have snatched the win for Fulham, but Robson-Kanu poked home at the death.

The result leaves 18th-placed Reading still searching for their first Premier League win of the season, while Fulham move into sixth.

The west Londoners even had their sights on the top four when they went 2-1 and 3-2 ahead, only to be pegged back both times by their spirited hosts.

Reading could then have taken all three points themselves, but a double save from Fulham goalkeeper Mark Schwarzer denied them a stoppage-time winner.

The Royals controlled the first hour of the match, creating a chance after just three minutes when a cross from Nicky Shorey was headed wastefully wide by Pavel Pogrebnyak.

After an otherwise dull opening 25 minutes, the game exploded into life when Leigertwood drove home a fine opener.

Captain Jobi McAnuff was the provider as he cut inside from the left flank and squared for Leigertwood, whose first-time strike flew into the top corner.

"A pulsating finale at the Madejski. Fulham were 2-1 and 3-2 up, only for Reading to peg them back on both occasions. Anyone who left early has been badly short-changed, but Reading are still without a league win."

Fulham spurned a clear opportunity to equalise when Damien Duff's cross from the right picked out Hugo Rodallega but his header from six yards was directed straight at keeper Alex McCarthy.

The onus was on Fulham to start the second half brightly but their forward play lacked pace or urgency, prompting Berbatov to make his frustrations clear with several gestures towards his team-mates.

Manager Martin Jol had seen enough and, after 58 minutes, brought off Rodallega and replaced him with the unpredictable Ruiz.

It proved an inspired move as the Costa Rican forward exchanged passes with Duff and unleashed a curling shot past McCarthy from the edge of the box.

Defender Baird, Fulham's match-winner against Aston Villa in their last game, looked set to be the hero once again as he put them in front with a glancing header from Ruiz's corner.

But Reading got back on terms when Adam Le Fondre crossed for his fellow substitute McCleary to slot past Schwarzer.

Ex-Reading midfielder Steve Sidwell was the next replacement to have a decisive influence as he threaded a perfect pass through to Berbatov, who lashed home his third goal since moving from Manchester United to give Fulham the lead.

Reading were not be denied, however, and equalised again from their next attack.

Shorey's clipped free-kick from the left landed in a crowd of players in the six-yard box and dropped for Robson-Kanu to bundle the ball home from point-blank range.

Reading manager Brian McDermott: "At 3-2 my weekend was absolutely miserable, but at 3-3 we were trying to kick on and win. It was a strange game - that's the fourth time we've taken the lead in this league and we need to finish the job off.

"All we can do is talk about the game and playing our football, doing what we have to do and if we do that the win will come.

"We try to win games and that's what we've done here for two or three years. The players derserve an awful lot of respect for getting back into that."

Fulham boss Martin Jol: "Berbatov was good. He can play in midfield, in the hole and up front.

"He needed an injection to play the second half and showed a lot of character.

"There was a problem with his rib which was very painful. Maybe it was broken, we'll have to take a look at it.

"We asked him to play on for 10 or 15 minutes but he stayed on the pitch and it was good to see him score the third goal."