John Sutton grabbed a deserved equaliser for Hearts with the last kick of the ball despite Ross County goalkeeper Michael Fraser's heroics.

Arvydas Novikovas beat Fraser from 14 yards after Marius Zaliukas set up the winger five minutes from half time.

Richard Brittain scored with a 55th-minute penalty after Andy Webster pulled down Iain Vigurs, who set up Stuart Kettlewell to fire County ahead.

But Sutton hammered in the equaliser after a miss-hit strike from Zaliukas. 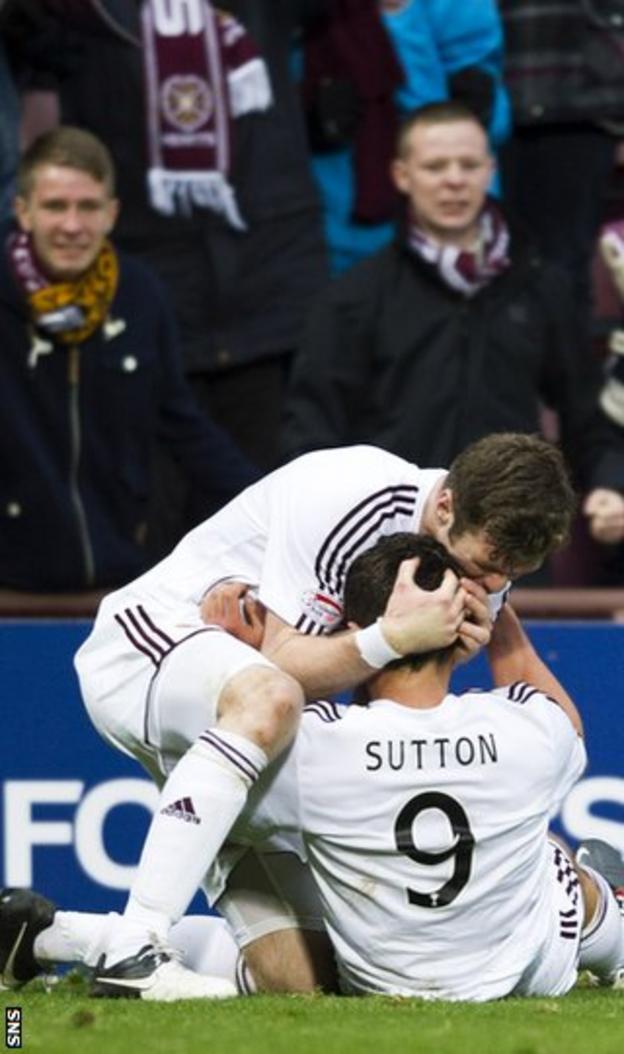 It was a sore end to the match for County, who were aiming to pull off a double over the capital sides following their 3-2 win over Hibernian last weekend.

A low-key start to the match was notable only for early Hearts pressure, with skipper Zaliukas guilty of heading an outswinging corner well wide of Fraser's goal from 12 yards.

With County struggling to advance over the halfway line, they had to rely on Fraser to keep the score level with an outstanding double save, first from Andrew Driver's left-foot shot then immediately from Ryan McGowan's diving header.

County registered their first decent chance when captain Brittain pinged a shot a couple of feet wide of goalkeeper Jamie MacDonald's right-hand post with a low effort from 20 yards.

Hearts striker Callum Paterson was certain he had been fouled in the box by Fraser after half an hour as the pair raced for the ball, but his claim looked weak.

County's only other chance in the first half fell to Kettlewell, who was afforded time and space to fizz a shot that MacDonald parried only as far as former Jambo Gary Glen, whose blushes at his wayward follow-up shot were partly spared by his being called offside.

Barr's downward header from Driver's corner looked a certain goal but was cleared off the line by the leg of Grant Munro.

With five minutes until half-time, the Lithuanians put Hearts ahead. Zaliukas played the perfect ball for Novikovas to run on to it and hit it through Fraser's legs.

After the break, the impressive Fraser blocked a Novikovas effort when the winger should have doubled Hearts' advantage.

The hosts were made to pay for that when Webster barged into the back of Vigurs in the Hearts box and Brittain calmly stroked home the equaliser.

Paterson stabbed a shot wide, Ryan Stevenson stung the palms of Fraser and Driver could not control his effort from the rebound.

Paterson raced from the halfway line to reach a through ball but his shot was diverted wide by Fraser under pressure from a hastily retreating County rearguard and the County keeper made a wonderful instinctive save from Paterson's overhead kick as Hearts responded.

Vigurs had threatened the Hearts defence with a run and shot moments before County moved in front.

On the more profitable occasion, in a quick break, Vigurs set up Kettlewell, who steadied himself just outside the box and, with stunning accuracy, hammered the ball a foot inside MacDonald's far post.

Substitutes Sutton and Gordon Smith both missed chances to level as Hearts camped in the County box.

With the final move of the game, Sutton latched on to a ball into the box and his shot on the turn across Fraser was just reward for the home side.