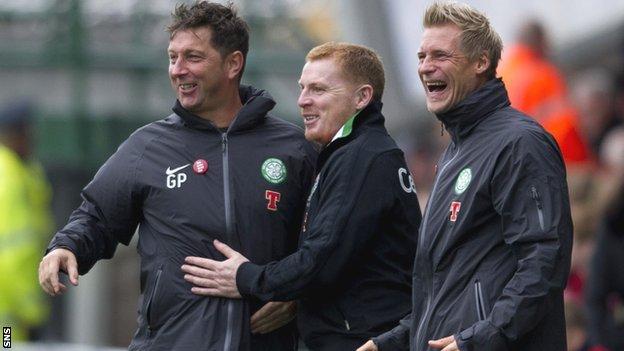 Celtic manager Neil Lennon heads for northern Spain to watch Champions League opponents Barcelona buoyed by but not doubting the step up in class.

Lennon wants to see the Catalan giants "in the flesh" when they take on Deportivo on Saturday evening.

"It's going to be a different game and a different animal even from Spartak Moscow," said Lennon of Tuesday's tie.

"But this [win over St Mirren] will have done the players no harm at all."

Celtic's last match in the Champions League was a thrilling 3-2 win in Moscow, raising hope that they can progress to the last 16 of the tournament.

"It will be awesome if we can get something out of the game; it won't be that great if we lose the game," warned Lennon ahead of the trip to the Nou Camp.

"I am taking a pragmatic approach. We are not getting carried away by all the surroundings.

"I want the players to adopt that approach as well.

"It's for the supporters, all the glamour and the glitz.

"The players have got to go there and compete and do themselves justice."

Celtic led the Buddies by four at half-time thanks to goals by Gary Hooper, Efe Ambrose and two by Victor Wanyama, the latter's two strikes a half-volley and a 25-yard curler.

The second half was a more even contest but it was once again Celtic who got the goal, when striker Tony Watt headed home with four minutes remaining.

"We were magnificent, every one of them," said the Celtic manager of his players.

"Good attitude, good tempo to the game, clinical in front of goal.

"We were awesome today, just awesome. It has been a great day for us."

Lennon was pleased that his players did not switch off after the interval, having established such a commanding lead.

He told BBC Scotland: "It's sub-conscious; you have a good tempo and then you have a 15-minute break. I just wanted to win the second half and we did that.

"We weren't great at the start of the season. We had the [Champions League] qualifiers and in the short term that was our main objective.

"Now that we have got in there the players are believing they are good enough to play at that level.

"Now the confidence is there, allied to the fact that we had [Beram] Kayal and [Joe] Ledley back today, and Lassad and Miku - his contribution was excellent.

"The players that we brought in are getting up to speed now as well."

Celtic's win in Paisley may have come at a cost, with a trio of players struggling with injury.

"Kelvin [Wilson] went off as a precaution because he was feeling tightness on his calf," explained Lennon.

"Lassad pulled up with his groin again so we will need to assess him over the next couple of days.

"[Adam] Matthews has got a bang on the knee. I'm hopeful about Kelvin and Adam but Lassad might be a doubt."