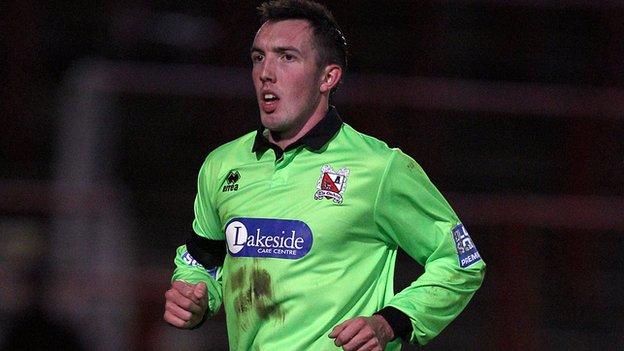 Ryan Bowman hit both goals as cash-strapped crisis club Hereford United won 2-0 against FC United of Manchester at Gigg Lane to book their place in the first round of the FA Cup.

The Bulls, who this week warned that they could go into administration, will hope for a home tie in Sunday's draw.

Worcester went out to a last-minute goal at Bromley, from much-travelled non-league striker Richard Paquette.

But Kidderminster Harriers also booked their place with a 4-2 win at Grimsby.

I've seen FC United three or four times and I know what they're like. They're the best side outside the Conference, so we knew this was going to be a potential banana skin

Derek Niven and Scott Neilson scored for the Mariners to pull it back to 3-2 by the break.

But Marvin Johnson wrapped up Harriers' victory in the dying seconds.

"We knew that Grimsby had been on a good run," Burr told BBC Hereford & Worcester. "But it was very pleasing from our point of view to bounce back from last week because the lads felt we should have got something from the Stockport game.

"The incentives of a good cup run are that they bring reward. Hopefully we can get a good tie on Sunday and march on because it was a terrific performance today."

Hereford manager Martin Foyle admits that his side's victory made it a happy end to a difficult week.

We've got to find out why we keep conceding goals in the last minute. There is something amiss - concentration, fitness, whatever it is

"It really started in the latter part of the week when supporters were putting contributions into the club," he told BBC Hereford and Worcester. "It just shows you how many people actually care about the place.

"I think that gave the boys a lift and we have come here today to what a very difficult tie.

"I have seen these three or four times and I know what they are like. They are the best side outside the Conference, so we knew this was going to be a potential banana skin."

Worcester City manager Carl Heeley told BBC Hereford & Worcester: "I thought we did enough to win the game but you have got to stick the ball in the net.

"We've got to find out why we keep conceding goals in the last minute. There is something amiss - concentration, fitness, whatever it is.

"We cannot keep getting ourselves into positions where we are by far in away the better side and yet we've lost the game."