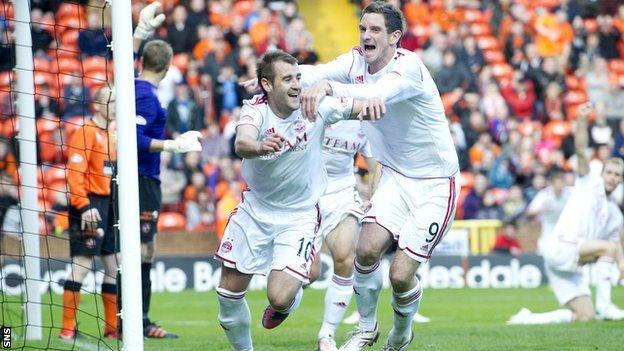 Manager Craig Brown reckoned a point apiece was a fair reward for his Aberdeen side and hosts Dundee United after their thrilling match ended 1-1.

"I'm fed-up with fight-backs but we have to fight back," said Brown after Niall McGinn's 53rd-minute leveller had cancelled out John Rankin's opener.

"That's 11 games unbeaten. A draw at Tannadice is not bad.

"I think a draw was a fair result. You would argue it was a better result for Aberdeen because we're away from home."

Both teams had chances to snatch all three points as the match raged from end to end, with goalkeepers Radoslaw Cierzniak of United and Aberdeen's Jamie Langfield in impressive form.

"If you were looking at some of the games I see on TV from the Championship and other leagues, you don't get the quality and excitement that we had here today," enthused Brown.

"There was a lot of good play from both sides.

"Dundee United are in a false position. They have a couple of games in hand, they are a better team than their league position [second bottom] indicates.

"They will finish in the top six."

Brown once again praised the 4,000 travelling fans, whose journey to Tannadice was delayed by a serious accident on the A90. Indeed, kick-off was delayed by 15 minutes.

"The support is exceptional. It's a compliment to the lads on the park that they are attracting the fans," said the manager.

"My message every game is that we cannot let them down."

And the performance of Clark Robertson at left-back for the Dons was described by Brown as "immaculate".

Brown added: "He hasn't played for ages after a serious injury, then he had two games with the Scotland Under-21s with Billy Stark over in Spain.

"He came into the team in place of Andy Considine and I thought he was absolutely outstanding."