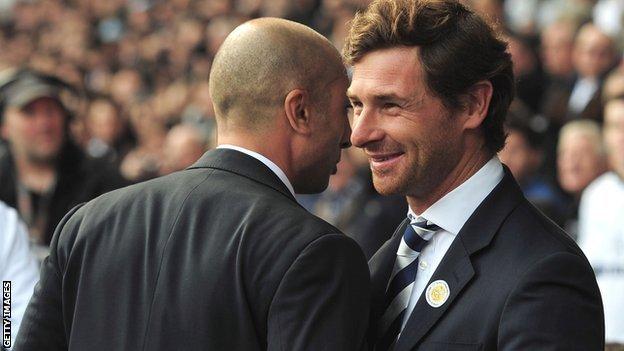 Villa-Boas, facing Chelsea for the first time since being sacked in March, saw Spurs undone by the trio of Juan Mata, Oscar and Eden Hazard.

"The bottom teams can beat the top but surely at the moment they are top of the heap," said the Portuguese.

Mata's double helped Chelsea come from 2-1 down to win 4-2 and stay top.

"There was individual brilliance from Oscar, Mata and Hazard, who were tremendous," added Villas-Boas.

"I think the kind of form Chelsea are showing is what we saw from Manchester City last year. Manchester United caught them up a little towards the last minutes of the season so you never know what can happen.

"The players they have, the level of form they have and the fact that they are so connected with each other means they are so creative and you can only compliment teams that play like this.

"I think you have to agree that both teams played a good game here but you also have to accept that Chelsea's trio up front behind the striker are amazing.

"They can unlock doors and create problems and they certainly managed to find spaces and managed to commit people because they are extremely creative and extremely good.

"We showed great strength of character to come back into the game. At 3-2 we had chances to make it 3-3 and when it went to 4-2 that was irrelevant because we were trying to get it back to 3-3."