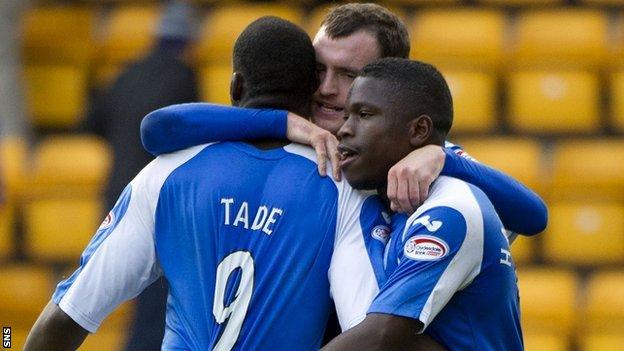 The 2-1 win was the Perth side's fifth league triumph in a row - a tally last recorded in 1971 when Willie Ormond was Saints boss.

"It very much was our aim," Lomas told BBC Scotland.

"You don't often get a chance to win five on the bounce so we wanted to keep the run going. It probably should've been a lot more convincing."

"I thought the boys were brilliant," said Lomas.

"We were down to our last 14 fit players. To get the win against a good Kilmarnock team who can cause you problems was very satisfactory.

"You always feel as a manager when you're 1-0 up and you miss the chances that we missed that it's going to come back and haunt you and normally that's what happens.

"But thankfully it didn't happen, we got the second. It's a good three points.

"Our focus is just to try and keep the run going, get as many points on the board as possible because we know it's so tight in the league."

And Lomas warned his side about getting carried away, with St Johnstone up to second in the Scottish Premier League.

"It can turn so quickly," he added. "We are probably getting away with it with luck in terms of injuries.

"Once you start getting ahead of yourself, football's got a habit of pulling you back down to earth.

"Every training session, I'm worried that we're going to lose a couple.

"We've just got to get on with it but we are very thin on the ground."