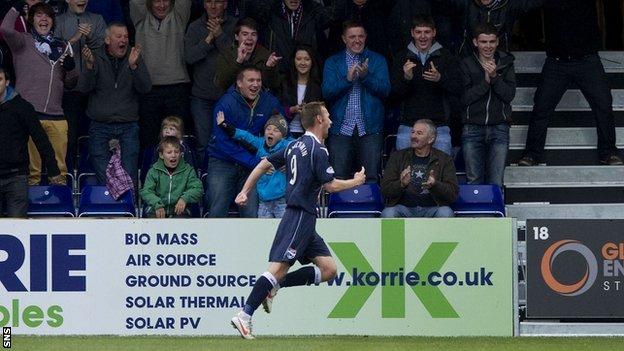 "Performance-wise, we've been excellent but getting that win or getting that point over the last three games has been difficult," said Adams.

"The only dip in form was the results. Just to win the game, it's massive in this league."

Stuart Kettlewell and Iain Vigurs netted for the hosts after Leigh Griffiths' opener for Hibs and James McPake levelled before the break.

"I felt maybe he could nick a goal at some point in the game," said Adams of McMenamin.

"The first half performance was excellent and it was a wee bit undeserved that we went in 2-2 at half-time. They had two opportunities in the first half.

"We've got one of the best defensive records and we're scoring goals as well.

"This is a difficult league and we've been able to close the gap between ourselves and Hibernian to four points and close the gap on the likes of St Mirren and Inverness as well."

Adams was also full of praise for youngster Steven Ross, who started in attack.

"Young Steven Ross, who made his debut today, and [Mihael] Kovacevic, who made his full debut, did exceptionally well," added the manager.

"[Ross is] a 19-year-old from the local community. It's been excellent that he's come through the youth system and done particularly well."