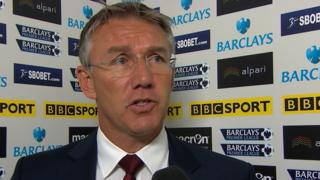 Manager Nigel Adkins thinks Southampton "can't stay up conceding goals like that", after a 4-1 Premier League defeat by West Ham.

Goals from Mark Noble and Kevin Nolan in the first three minutes of the second-half were "poor" ones to concede after a first period in which Southampton were "very, very good".

After captain Adam Lallana pulled one back Adkins believed his side were in the "ascendancy" but Noble's second from the spot and a late goal for Modibo Maiga sealed the win.

Southampton have conceded 24 goals in their first eight Premier League games - the most in the division - and fall into the relegation zone.